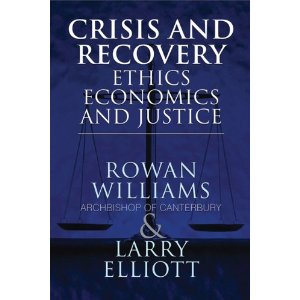 In a case of excellent timing with Irene's recent post, as well as Martha Starr's upcoming book, Consequences of Economic Downturn: Beyond the Usual Economics

The contributors seem to be drawn from a wide range of fields, from academics and politics to the non-profit sector and the church, all commenting (as do Irene and the contributors to Martha's book) on the moral aspects of the current downturn. Chapters which looks particularly intriguing to me upon first glance are Phillips Blond's "There Is No Wealth But Life," Andrew Whittaker's "Culture and the Crisis," and the Archbishop's own "Knowing Our Limits."