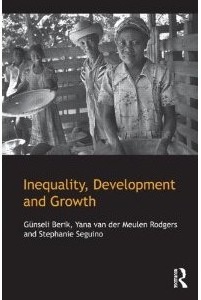 Review of Inequality, Development, and Growth

This volume is a flagship for feminist macroeconomics and was first published as a special issue of the journal Feminist Economics in 2009. Its major contribution to the study of inequality and growth is that it follows a two-sided approach to the relationship between these two phenomena. The book examines not only the effect of macroeconomic policies and economic growth on inequalities but also as the effects of inequality on growth. The volume presents a wide diversity of theories, methods, country studies and levels of integration by an equally wide diversity of authors, male and female, and from the developed as well as the developing world.

The challenge of a volume like this, with eleven chapters, is not to lose focus. In order to help the reader not to get lost, I will limit my review to the introduction, with linkages to some chapters discussed therein, and two very different empirical chapters. I hope to give the readers thereby a good impression of the book’s major contribution as well as of the diversity it entails. The (long) introductory chapter, by the three editors, is more than an introduction to the chapters – it goes into theory and methodology and argues why it is important to study the relationships between growth, development and inequality also from a gender perspective. The editors demonstrate the value added of a gender perspective by using feminist standpoint theory. Their position is founded upon Amartya Sen’s Capability Approach. This leads them not only to argue for equality of opportunities but also equality of outcomes. However, not at the individual level, but at the group level, as they explain on p. 2: “Rather, we envision equality of outcomes as a condition of similar group distributions, such that no one group is systematically disadvantaged even though within-group inequality may exist.” The link to growth is made through recognizing that “… achieving an equitable expansion of capabilities depends crucially on how countries achieve growth and how they utilize the proceeds of growth” (p. 3). The editors clearly engage with the theoretical debates on the relationship between inequality, growth, and development. They criticize the Washington Consensus approach which assumes that market liberalization will automatically reduce inequalities through increased competition, because of the costs attached to discrimination. Instead, they argue – and demonstrate this empirically in the volume – that market processes can actually exacerbate inequalities. In order to show their argument, and the feminist perspective embedded in this, I will quote their point, on p. 5. at length. “Gender norms are embedded in labour markets, and fostering competition can perpetuate inequality. For example, when women enter the labour market, they are often paid less than men on the assumption that they are dependent on men. Assigning men the role of breadwinner also provides a rationale for hiring men into jobs with upward mobility. Women, in turn, are slotted into low-wage, insecure jobs considered to be fitting for their assumed role as secondary wage earner. Further, in the absence of policy to address women’s unpaid housework and caring responsibilities or paid work arrangements that accommodate caring labour, competition in labour markets is stacked against women who have difficulty maintaining labour force attachment levels equal to those of men. These barriers, in turn, lead to persistent gender disparities in occupational outcomes and wages.” This feminist theoretical standpoint about the failure of markets to reduce discrimination and other forms of inequality, leads the editors to understand growth, development and inequality as closely related in both directions. Not only do they understand how some patterns of growth can lead to or reinforce inequalities, but also it leads them to comprehend how inequalities can hinder growth and development.

Finally, the editors argue for policies toward equitable development. The chapter by Koopmans is a good example for the need of such policies, in this case on trade regulation. Koopmans convincingly shows that the current food crisis in the Senegal River Valley can only be addressed by providing access to technology and securing women’s land rights. But she also recognizes that such measures will remain ineffective as long as there are no import constraints allowed for products that compete with locally produced food crops that are key to subsistence – crops that are largely produced by women. Hence, the chapter indicates that trade liberalization, in particular without land rights for women, tends to undermine food security and agricultural growth in the poorest and most vulnerable regions of the world. Gender inequality is here not only an effect of liberalization but also a cause of the lack of success of trade liberalization. The chapter indicates that both domestic policies towards strengthening women’s land rights and access to technology are important, as well as trade regulation to enable food production in fertile but vulnerable regions of the world.

The second and last chapter that I like to discuss here is by Siddiqui who constructs a CGE model form Pakistan to test whether men and women share equally in the effects of trade liberalization. Before the CGE can be constructed, data on intra-household differences need to be collected. Using available socio-economic data for Pakistan, the author finds that the consumption of basic needs as well as basic capabilities (education, health) are unequally distributed over men and women, and more so in poorer households. Next, the author has constructed a gender-disaggregated SAM including time-use data on unpaid work. The SAM shows that whereas men spend 50% of their time on market work, 10% on unpaid work and 40% on leisure, women spend 33% on market work, 47% on unpaid work and 20% on leisure. This indicates that women suffer more than men from time poverty. The CGE has six blocks of equations: income and savings, production, demand, prices, trade, and equilibrium. Gender rigidities are included through a low elasticity of substitution (0.3) between the labour of men and women. The nonmarket sectors of social reproduction (unpaid work) and leisure behave like market sectors and produce goods that are consumed by the households themselves. Total household income is the sum of receipts from the market and the nonmarket economy. The simulation exercise is for a 50% revenue neutral tariff reduction. The model simulation leads to the following results. The trade liberalization leads to a net increase in women’s employment in industry, driven by the textile sector, and net decrease of male employment in the industry sector. For both women and men employment declines in agriculture and services so that the total employment effect is negative, 0.7% for women and 0.4% for men. Female leisure declines, or it increases less than for men, depending on the type of household. The poorest households experience the strongest income decline due to falling wage rates for unskilled labour. Women’s consumption is more affected than men’s but not in rich households. Poverty declines on average by 0.3% but not for all households, whereas relative poverty among women increases slightly due to an increase in the share of women among the poor. Time poverty increases for women, not for men. In conclusion: the chapter demonstrates how a gender-aware CGE model can capture a variety of positive and negative gender (equality) effects of trade liberalization, beyond employment and wages. This is an important contribution of feminist economic analysis to trade evaluation studies, even though it has its shortcomings, such as the assumption that the nonmarket sector behaves similarly as the market sector, ignoring informal institutions.

In conclusion, the volume features state of the art research in feminist macroeconomics. The wide variety of approaches, however, may lead some readers, who are comfortable with the mainstream literature on inequality and growth, to get a bit overwhelmed by the wide diversity of theory, method, and level of analysis that this collection inevitably brings. In my view, the quality of the volume should keep all readers interested and hopefully motivated to use some of the insights in their own research which will enrich analyses of inequality and growth.