Home About Subscribe Teaching Guide
Kantian economics, business leadership, and social responsiblity
Marriage equality in New York: It should have been done better. 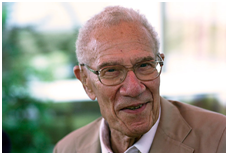 At 87, Robert Solow (Nobel Prize 1987) recently gave up his office in the MIT Department of Economics.

Finance and Development caught up with him before his move to survey his career of more than 60 years. Solow's parting comment is worth repeating and discussing:

"[T]he most important thing in intellectual success is being part of a high-morale group. I think that progress comes from intellectual communities, not from individuals generally. That's what's wrong with Nobel Prizes and all that."

Social economics explores the ways in which group interaction and ethics contribute to the creation of (among other things) trust necessary for change and growth. Most intellectual markets involve autonomous--but not anonymous--agents whose group interactions alter preferences and influence choices through framing. Among other things, our colleagues help us reduce procrastination by according (or withholding) status and other social rewards (see The Thief of Time: Philosophical Essays on Procrastination, edited by Chrisoula Andreou and Mark D. White, Oxford, 2010).

The "fallacy of composition" is the widespread but mistaken notion that what is true (or works) in the individual or group situation is also true (or works) in society at large. Applied here, there is a dichotomy between the evolutionarily-adaptable emotional instincts for sociability (and the resulting ethical rules that evolve) and the more abstract and logical duties that are owed to anonymous strangers. The production of intellectual capital has been modeled as an anonymous quest for profit maximization. This is, at best, misleading; the micro-micro foundations of success may have more to do with emotional commitments and duties than with pecuniary motives.

Not that more money hurts -- but it might. A long time ago when I was serving on a search committee for the Dean of a new school that had just been endowed, a top candidate for the job asked about the facilities. "Don't worry," said the provost. "We're building a brand-new building and you'll have the best office in it." The candidate shook his head ruefully and eventually turned us down. He stated: "That's not how you build camaraderie when starting a new program. All the fancy offices and money create jealousies and petty spitefulness, destroying morale. If I start a new program like this, it should be housed in the basement of the worst building on campus. And all of the new hires will draw together as a team, focus on the important things, and get those things done!"

(P.S. -- Don't show this to my Dean, because I like my corner office and can swear my productivity is higher in it. J )