Home About Subscribe Teaching Guide
Reasoning for Persuasion, Not Truth
Blogging Can Be Dangerous for Your Health

I've recently stumbled upon two interesting articles that explore the question of the motivation of economists. 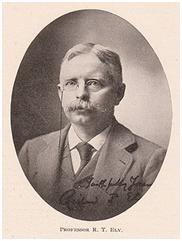 ne of the self-described "rebels" who founded the American Economic Association in 1885. In 1936 he looked back and wrote this article for its 50th anniversary.

Ely was a renegade German Historical School member, who placed emphasis upon historical, statistical, and inductive research in economics. By contrast, the orthodox view of the mid 1880s was of laissez faire and free trade, and the orthodox methodology was deductive reasoning. According to the orthodoxy, virtually all questions in economics had pretty much been solved!

The rebels, by contrast, thought that our understanding of truth evolved; and in particular, public policies had to be adapted to conditions of time and place (143). Accordingly, "economics was not a dead thing of the past, but a live thing of the present, inviting young men to put the best they had into this field." (146)

Ely's father tried to warm him off a career in economics, particularly as an underdog fighting the orthodoxy: "Richard, you are a young man. Some day you will want to get married and have a family. How can you expect that economics will support you?" (142)

Ely notes that he and his co-conspirators were "humanitarians" who "wanted to help bring about a better world in which to live." (145) Moreover, motivated in terms of agency, he says, "We wanted the right to exist scientifically and to express ourselves in writing and in teaching." (145) He recounts several cases of people trying to get him fired, so his fear here was not manufactured.

This interesting paper was presented at the AEA National Conference on Teaching Economics, held at Stanford University in June 2011.

The authors obtained data for 89 prominent economists, 62 of whom are Nobel Laureates. Based on a variety of sources, the results show that about a third of the sample became economists out of a humanitarian desire to "make the world a better place" or from an agent motive to "make a difference" in the world. Only 2 of the candidates directly cited monetary incentives as motivators, but this likely underestimates the case for employment and remuneration considerations. Other important factors were exciting coursework and peer influences.

More than half (53%) of the sample enrolled in college without any interest in economics. One reason to be excited about teaching is the idea that one of your student's careers will be permanently changed for the better by the introduction to the discipline of economics.

What's interesting about both these articles is the nuanced account of the motives of economists in an area of great interest—one's careers. Economists, like most people I suspect, are driven to some important degree by a desire to create meaning in their lives. Meaning comes from seeing and valuing one's place in the wider social and moral universe. As Adam Smith noted, it is wonderful to be viewed by others as being a great person; but true meaning comes when we see ourselves as being worthy of approbation. In short, moral accounting often matters in personal choice.