The Walk-Out at Harvard

As you may have heard, students at Harvard recently walked-out of Greg Mankiw's Ec 10 Principles class because of alleged ideological bias in his presentation. Guess what—we all have a bias! Dani Rodrik notes that:

…Carlos Diaz-Alejandro once put it, "by now any bright graduate student, by choosing his assumptions regarding distortions and policy instruments carefully, can produce a consistent model yielding just about any policy recommendation he favored at the start." ["Trade Policies and Economic Development," in Peter B. Kenan, ed. International Trade and Finance: Frontiers for Research, Cambridge, Cambridge University Press, 1975: 93-150, p. 97]….

Instead of communicating the full panoply of perspectives that their discipline offers, [economics teachers] display excessive confidence in particular remedies – often those that best accord with their own personal ideologies….

In our zeal to display the profession's crown jewels in untarnished form – market efficiency, the invisible hand, comparative advantage – we skip over the real-world complications and nuances, well recognized as they are in the discipline. It is as if introductory physics courses assumed a world without gravity, because everything becomes so much simpler that way.

While we all have a necessary ideological bias stemming from world view and random facts, Joseph Schumpeter argued that ideology can be overcome using a scientific method. But a first step seems to be to recognize the bias and admit it to students and offer opportunities for alternative viewpoints.

Instead, economists portray "efficiency" as a scientific principle—when it is a moral judgment swaddled in the language of impartiality. 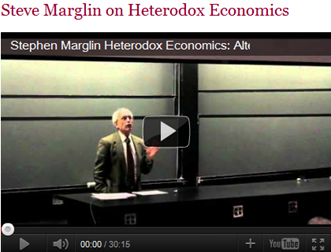 Steven Margolis, also at Harvard, staged a "teach-in" about the Mankiw walk-out (link is to a video of it). First, Margolis noted that a walk-out usually isn't the right way to deal with intellectual differences. Second, he discussed his attempt to offer an alternative Ec principles course at Harvard, which was rejected by the economics faculty--then accepted only as an alternative studies course. Students at Harvard, like students at many other schools, are not allowed to learn about alternatives to the neoclassical model and get credits toward the major! This is reflected also in the demise of "History of Economic Thought" classes where one could learn about historical points of view and schools.

Mankiw justifies his position this way: "A main disagreement I have with Steve is pedagogical. I believe his critiques of mainstream economics should be presented after students have had a standard course like ec 10."

Mainstream economics has a lot to teach students, but I completely disagree with Mankiw in his assertion that students should learn about problems in a separate course. If we are training leaders, not technocrats, we cannot afford to allow the brainwashing of young minds. Teaching economics as if there is no debate is tantamount to brainwashing. Far better to integrate ethical debates from the start, to inculcate in students the notion that economists have a particular ethical framework (consequentialist) and a defensible yet debatable goal (maximizing the economic surplus).

Margolis notes that high school econ classes explicitly omit anything controversial. The new National Content Standards in Economics states that: "Including strongly held minority views of economic processes and concepts would have confused and frustrated teachers and students who would then be left with the responsibility of sorting the qualifications and alternatives without a sufficient foundation to do so."

And, if Mankiw has his way, controversy will be removed from college principles classes as well! Most students never go beyond one economics class. Even if they do go on to graduate school, they would surely not expect to find "balanced" treatment at that higher level. The bottom line is, if critical thinking about plural viewpoints isn't a part of Econ principles, students will largely never experience it.

Forgive the self-promotion, but teachers who want to easily integrate a bit of ethical discussion in Econ Principles can try this book of ten lessons by Wight and Morton, Teaching the Ethical Foundations of Economics, NCEE, 2007). Introducing different ideologies and ethical frameworks takes only a moment of time, and creates enthusiasm in students who are treated as adults not children who need rote learning.

Great post. It seems that defining economics as a focus on efficiency is very destructive. Why is it so hard to accept that efficiency cannot be the foundation of our science?