Adventures in jurisprudence: The new Kaiser poll on Obamacare

Classes start for me on Monday (though our spring semester starts today--that's right, on a Friday), and my first class will be one of my favorites to teach. legal philosophy. And luckily for me (and for my students), I was given the perfect news item to start the class and motivate our discussion. 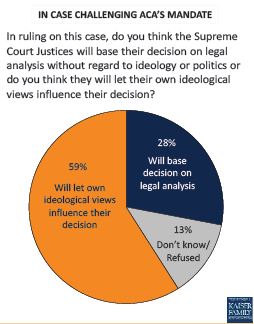 Kaiser reported that 59% of those polled believed that the Supreme Court justices will let their “own ideological views influence their decision” on the ACA, and 28% said the justices will “base their decision on legal analysis without regard to ideology or politics.” The rest were undecided or refused to answer—perhaps because they realized neither choice was adequate. The justices not only will but must use ideology to make their individual decisions, but it will be ideology in the sense of a reflective legal and political philosophy developed over years of study and experience, not their own personal political preferences.

The hearings over the ACA, particularly regarding the individual mandate, will surely prove to be the most important legal case of the decade, if not longer. It is what scholars of judicial decision-making call a “hard case,” one which cannot be settled decisively by what is written in the Constitution and statutes or embodied in over two hundred years of judicial precedents. In such cases, the cynic would say that judges make new law out of thin air by indulging their personal political preferences. But we need not resort to this, when there is a better answer that both explains differences of opinion while retaining a strong sense of civic duty and impartiality among judges.

As legal philosopher Ronald Dworkin wrote, judges decide hard cases by interpreting the existing legal materials (the Constitution, statutes, and previous decisions) and arriving at the answer that best maintains the integrity of the legal system. The question then becomes not whether they interpret the law but how. This is where ideology enters the process, but not in terms of personal politics. In making hard decisions, each judge interprets the law against a legal and political philosophy that he or she feels best fits the historical materials.

It is not a matter of whether each justice supports or opposes the ACA, but whether he or she believes the ACA is consistent with their view of the  legal and political history of the United States of America. Understood this way, ideology does play an integral role in judicial decision-making, but it is a principled ideology based on a careful reading of law and history, not on a judge’s own predilections regarding the case at hand.

This is a subtle distinction, to be sure, and one that leads to tremendous confusion. Legal scholars and ordinary citizens alike are much too eager to say that judges vote their politics, whether liberal or conservative—especially when the judge is on the “other side on the aisle” from the critic. But this shows  a regrettable degree of bad faith. It is just as easy to say that each judge votes according to the principles for which he or she thinks—after years of study, reflection, and experience—that the United States stands. Will the resulting positions correspond to their personal political beliefs? Of course they will, but that doesn’t imply they are voting based on their personal politics, but rather that their personal politics are based on the same careful analysis that informs their judicial decision-making.

Judging from the many arguments I’ve heard and opinion pieces I’ve read over the last several years, I believe this is how most people outside Washington think about the Affordable Care Act and the individual mandate: in terms of principle rather than politics. Why, then, is it so hard for them to believe that the justices of the Supreme Court think in the same way?