“Shareholder value is the dumbest idea in the world”

That's not me saying it – it's Jack Welch(!),voted the "Manager of the Century" by Fortune magazine in 1999.

Executives spend way too much time managing expectations and not enough time building long term value. To use a simile of Roger Martin's, it is like football coaches spending their week on the phone to Vegas, massaging the point spread—and then running the game on Sunday to exactly meet that spread! The game is "fixed." Would fans stand for that?

If football fans don't like it, why should stockholders? Management guru Peter Drucker provides this interesting review in Forbes of Roger L. Martin's, Fixing the Game: Bubbles, Crashes, and What Capitalism Can Learn from the NFL (Harvard Business Review Press 2011). 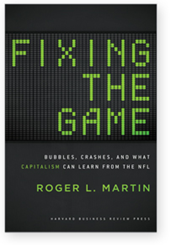 Drucker and Martin both attack the demon that is the reality today on Wall Street: chasing earnings expectations rather than building a customer base through service and product innovation. The demon raises management costs, fudges accounting, and distracts everyone from long term goals:

"Although Jack Welch was seen during his tenure as CEO of GE as the heroic exemplar of maximizing shareholder value, he came to be one of its strongest critics. On March 12, 2009, he gave an interview with Francesco Guerrera of the Financial Times and said, "On the face of it, shareholder value is the dumbest idea in the world. Shareholder value is a result, not a strategy… your main constituencies are your employees, your customers and your products. Managers and investors should not set share price increases as their overarching goal. … Short-term profits should be allied with an increase in the long-term value of a company."

Drucker's focus on the product and the customer as the goals, while treating shareholder return as a constraint, seems paradoxically better suited to creating long term value for shareholders. To use the phrase coined by John Kay, obliquity means getting to an end through indirect means. That is how Jack Welch accomplished his success.

Martin's book has various policy conclusions about how to spur a re-thinking, through changing tax and accounting laws. But it also will take a careful discussion about the philosophy of capitalism. The idea that maximizing shareholder value is and ought to be the only goal of a manager is, of course, an idea championed by Milton Friedman. As developed here, Marty Calkins and I argue that Friedman's exposition contains some serious internal contradictions.