Home About Subscribe Teaching Guide
On Barry Schwartz's "The Danger of Too Much Efficiency" in The New York Times
Call for abstracts: Edited volume on law and social economics

If you wanted to change people's ethics, for God's sake don't put them in a classroom with a philosopher! At least, that's the advice of Adam Smith….

Instead, get students to read great literature, become immersed in characters who make mistakes and pay the penalty, personalities who invoke our hatred or our respect and admiration. The arts provide the fodder for our moral imaginations, which gain us entrance into the world of ethics. (For elaboration, see "Adam Smith's Ethics and the Noble Arts".)

These insights are making their way into … the judicial system!

Martha Nussbaum has long used Smith's insights to train judges and lawyers, and writes about it in Poetic Justice: The Literary Imagination and Public Life (1997). Now that effort is going more mainstream to challenge inmates.

"Changing Lives Through Literature" is an alternative sentencing program that started in Massachusetts in 1991 and has spread to 8 other states and the UK. The program claims a 50% reduction in recidivism compared to incarceration, and "near-end" to violent behavior. Some of these claims need to be scientifically verified, controlling for self-selection bias and other factors. If these results bear up, they support Smith's thesis that the moral imagination is one pathway to changing voluntary behaviors, and that reading great novels is an important way to fire up the moral imagination.

A closer-to-my home example of such a program was started by a Virginia Commonwealth University writing English professor, David Coogan. David went into the local jail—a fairly rough place, terribly overcrowded—and began to offer a college course in autobiographical writing. About half of the students are inmates and about half are regular undergraduates. The activity of writing forces one to become introspective, search for answers, and see alternative pathways. As Sister Wendy Beckett, the art enthusiast noted, the creation of art is an integral part of the human experience. 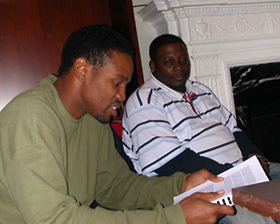 In the photo, Kevin Belton reads his work while Dean Turner listens during class.

David is editing and annotating a book of prisoner writings, called Strip Poker: A Writing Workshop at the City Jail. I've read the first 50 draft pages. It's fascinating and illuminating and I'll blog more about it when it comes out. Meanwhile, interested readers can sample at the link.