What makes anyone remembered positively by history? A heralded leader stands for something that may be unpopular at the time but proves with hindsight to have been correct. John Shelby Spong blogs about the retirement of Rowan Williams, the Archbishop of Canterbury. Williams was a brilliant thinker and someone who promised to take the Anglican community through the dark passage that would lead to equal rights for women and homosexuals in the church. 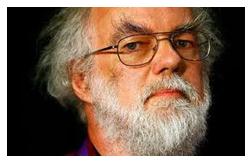 Instead, according to Spong, Williams folded for the sake of a false unity in the Anglican community, but never achieved that either. By attempting to appease those who oppress gays and women, he ensured that he would be on the wrong side of history. Spong argues:

"Rowan Williams will not be remembered well by history.  The tragedy is that he had the talent to be much more.  He was a failed leader because he never had the courage to stand for any truth that was costly.  That, however, is where leadership is born, where it is revealed and where it is demonstrated."

That may be too harsh. The attempt at unity does have important value. I ultimately agree with Spong that a smaller church that represents something is better than a larger church that fails to. And couldn't the same be said about the Republicans—led by Romney trying to build a unified party but not standing for much in the process? And yes, the same could be said for Democrats. Leadership may also be about building coalitions and making compromises, and doing what is possible rather than what is best.