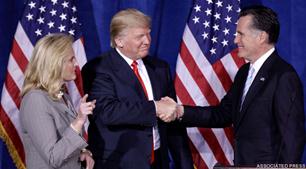 Trump, anticipating a meeting with Mitt Romney, re-affirmed his belief that President Obama's birth nation was Kenya. His entire evidence for this is that a book publicist once incorrectly wrote: "Born in Kenya and raised in Indonesia." The sentence was corrected before going to press.

The only problem with the conspiracy scenario is the utter ludicrousness of the claim. Who is this secret cabal that was planning Obama's ascendancy to the White House as a babe of mixed race fifty years ago? Do insiders really control the world? If Obama beat Hillary, and Hillary had the whole White House and Democratic Party insiders at her disposal, why didn't she use that insider power to win?

A slightly less sinister theory has Obama's white grandparents placing the newspaper announcement in anticipation of their daughter's divorce from Obama's Kenyan father. The problem with this scenario is that newspapers only printed official birth announcements issued by the Hawaiian Department of Vital Statistics.

Hiding out in a media echo chamber makes it possible to avoid encountering certain facts, such as the fact of Obama's birth announcement in Honolulu newspapers. Placing a fake announcement would have required knowing — well before the passage of the Civil Rights Act — that someday a certain foreign-born black child named Obama would beat a woman named Clinton, who had been first lady, for the Democratic presidential nomination, and that fake evidence of his citizenship would then be required.

I am reminded of Ronald Reagan's budget director, David Stockman, who blatantly made up spending and revenue projections that Reagan wanted to hear. Romney is pandering to people who are equally (and willfully) disconnected from reality. This is not a good sign for those who value truth for the sake of truth.