Suppose you are hired to predict how much a $100 million investment paying 10% a year would be worth after 10 years. And then you are told: "Oh, you can't use compound interest to calculate that value." No economist would take the job under these constraints, because the answer you give would be false. Ignoring compound interest makes your answer hugely wrong, in this case by $59 million.

That's essentially what might happen in North Carolina, where the legislature is considering restricting who and how state agencies can calculate sea level rises. In particular, from TPM comes the story of how the legislature wants to limit sea level projections to only linear estimates, prohibiting accelerated rates.

What a great idea! Let's have the legislature dictate how scientific predictions on global warming should be done! Let's bring back the Middle Ages (or Meddle Ages) when science was subjected to political control. 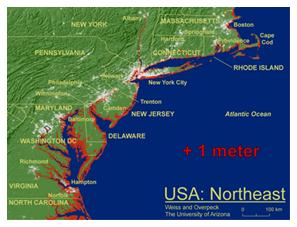 Here is an excerpt from the proposed law:

So, first, the law would create a monopoly by only allowing one group of bureaucrats to estimate global warming effects. The law, if enacted as written, would apply to all state institutions—including presumably state universities, whose scientists could no longer use state computers or labs to forecast impacts of global warming on sea levels in North Carolina. The law would reduce checks and balances—from the competition of ideas.

And second, the law would prohibit the use of modeling that might be most appropriate, such as accelerating rates.

The not so subtle battle here is over land rights for business development. Slowing the projected rise of sea level leaves more land for development.

In theory there is nothing wrong with a private market selling land for development that is near a flood plain. But there is a great deal wrong with a government agency being told to issue low-ball projections on flood plains that are false on their face. Those false reports—paid for by taxpayers—would likely lead families to make real estate purchases they otherwise might have stayed away from.