Home About Subscribe Teaching Guide
Narcissism Needed at UVA?
Break-up of the Euro

Via Krugman comes a link to Jared Bernstein and a chart from Jay Shambaugh (long pedigree).

The chart appears to demonstrate that countries with larger increases in government spending after the Great Recession of 2008 tended to have faster economic growth. 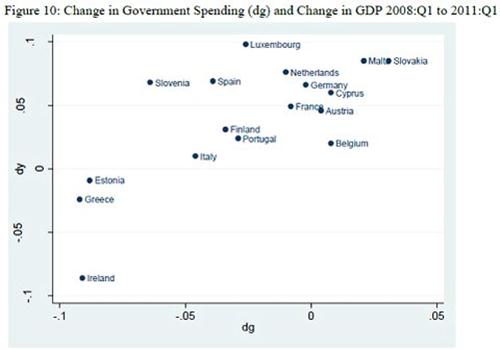 What are the ethical implications of this chart? Is it necessarily a good thing that GDP rises because of a growth in government?

In some circumstances we might be appalled by that outcome. Under Stalinism, many western economists feared that the Soviets would outstrip us economically because all investment was done by the state and was not subject to market fluctuations. A growing economy would not be a good thing if we had to give up basic freedoms and human rights to achieve it!

And during the Reagan era the U.S. massively built-up military spending. That made the U.S. the unrivaled military leader in the world, but the unintended consequences may have provoked our enemies to the 9-11 bombing and ourselves to the hubris that led to the second invasion in the Gulf. Many oppose a rise in income that is produced by a massive military build-up.

Is either scenario the context of the current debate? Is Krugman calling for a Stalin-like government take-over of the private sector or a military build-up? Hardly. The ballooning government debt since 2007 was caused by… the decision to save the private banks! The bailout of GM was small by comparison, and deliberately short-term. While long-term problems of Medicare, Medicaid, and Social Security need solutions, they are not the immediate deficit problem, which can be related to trying to preserve a capitalist financial system.

The kinds of programs Keynesians have called for are road building and other infrastructure that are traditional functions of government (and could be enhanced by partnerships with private sector investors). This is not Stalinism, although one could argue the camel's nose is always there.