How Much Inequality Do We Want? This is the Wrong Question. 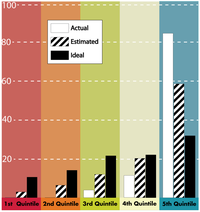 In fact, he writes, "most likely, if you participated in one of our tests, your response too would have fallen in line with these findings." Uh, no, it wouldn't--I would have refused to answer the question because I don't accept its premise, which is that the final distribution of wealth is more important than the processes which led to it. In Robert Nozick's terms, Ariely implicitly uses a patterned theory of justice, whereas I prefer a historical theory of justice. When I see a skewed distribution of income or wealth, my first thought is not, "let's correct that," but rather "let's see what caused the skewed distribution and see if they're anything unjust about that."

Ariely illustrates this distinction with his two proposals for lessening inequality: education and taxation. Education improves the process while taxation improves the results after the fact. This is comparable to making sure a football game is officiated fairly, but then adjusting the score after the game is finished. If the outcomes of a football game--or of the economy--result from just and fair processes, then it is difficult to find a justification for questioning the results (outside simple utilitarianism).

Ariely describes his methodology as inspired by John Rawls' "veil of ignorance," in which people are asked what kind of world they'd like to live in if they had no idea where they'd fall in socio-economic terms (or, more broadly, in terms of race, gender, and so on). Ironically, however, Rawls was opposed to redistribution after the fact, and meant for his veil of ignorance metaphor to be used when designing institutions that would benefit the worst-off in society so wealth would not have to redistributed after the fact. (Ronald Dworkin's resource-egalitarianism takes the same approach: equalize resources at the beginning of persons' lives, and let them make of their lives what they will.)

My point does not lean only to the left or the right; people on both sides of the political spectrum (and especially libertarians) will happily point out injustices in the system that lead to unjust outcomes. This is one thing that the Occupy movement and the Tea Party have in common: there is corruption throghout the system that benefits the few at the expense of the many. But it does little good to say what we want the world to look at any point in time. Instead, we should focus on how we want to world to work over time--all the time--so everyone has a fair chance at leading the life they want to live.

* They also neglect to ask what means people are willing to accept to reach their desired level of inequality--I imagine that's where differences in political affiliation would show up the most. Ariely admits to this shortcoming, but casts it in terms of what sacrifices people would be willing to make themselves to lower inequality, not what structural changes in our institutions they would recommend:

Our study also doesn't deal with how to bring what people say they want under the veil of ignorance into line with what they're willing to do when it's their money and resources that are about to be distributed. It is one thing to get people to tell us what kind of society the would want to join, and another to get them part with their money in order to create that society.

It seems you protest too much, Professor White. Your response has the tone of those who think any discussion of inequality is inappropriate. I'm not quite sure where you draw the foundational line of this post; the results to which you refer are the results of the process. Is it a question of first principles? If so, I am not as eager to carve letters into stone as some. The libertarian obsession with first principles is intended, in my eyes, as a distraction from the cruel injustice of the society they imagine.

Taxation isn't meant simply as a crude implement of ex post equalisation; It is also, don't forget, the means with which we pay for the actual instruments of fairness, such as education, healthcare, etc. It's a common fallacy (especially among libertarians, to borrow a construction) that taxation exists for its own sake.

Ex ante is preferable to ex post; I think we agree this point. But when the failures of the system in question center around rents, taxation to claw back some of the rent is not necessarily distortionary.

Thanks for the comment, Jonas--please allow me to clarify some points. By no means do I think any discussion of inequality is inappropriate, but I do think that certain ways of approaching and dealing with it are. Also, I do not focus on first principles or original positions, but rather on the justice or injustice of ongoing institutions. Finally, I do not argue that taxation is exclusively a redistributive instrument--but as a simplistic, blunt response to inequality, it can be.

I'm glad we do agree on ex ante versus ex post! Though, again, the source of rents, not merely their existence or judged exorbitance, is the proper focus on inquiry. Just ask Mr. Chamberlain. ;)