The philosopher and mathematician Bertrand Russell (1872-1970) was one of the 20th century's greatest minds and liveliest writers. In this video he reflects on what he learned over his lifetime. 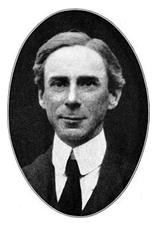 "Love is wise, hatred is foolish. In this world, which is getting more and more closely interconnected, we have to learn to tolerate each other. We have to learn to put up with the fact that some people say things we don't like. We can only live together in that way."

"And if we are to live together and not die together we must learn a kind of charity and a kind of tolerance, which is absolutely vital for the continuation of human life on this planet."

I always felt a bit sorry for Bertrand Russell. Yes, it takes particular arrogance on my part to say this. But after reading Why I Am Not a Christian and Other Essays on Religion and Related Subjects (first published in 1927 and still in print) I remember thinking, "He just doesn't get it." I agree with his scathing indictment of the hypocrisy in the church of his times. But why confuse that with wisdom and truth?

The part Russell misses is the rich spiritual life and the rich life lessons that come out of religious thought. I do not believe Christians—or any religious group—have a monopoly on truth or that Christians are privileged with ideas not available from other sources. We can take the religious dogma and screed out of religious life and find much remaining to be of value.

My feelings are very much in line with Bishop John Shelby Spong, an intellectual's intellectual, who doesn't feel the need to throw the baby out with the bathwater. If you are a virtue-ethicist, then studying The Bible, The Koran, The Talmud, or other religious texts may offer ways of understanding how to live a flourishing life that go far beyond a list of literal commandments. An interior life of prayer and meditation does not mean abrogation of reasoning—quite the opposite, as shown by Thomas Aquinas, Teresa of Ávila, and in the modern era by Thomas Merton and many others like Spong.

I don't know if Russell's views on religion changed over his lifetime. The video certainly suggests that in the end he adopted tenets that are well articulated in the New Testament: stories of turning the other cheek, the commandment to love our neighbors, and to follow the example of the Good Samaritan who affirms that our neighbors are of a different race, class, and culture than our own. With globalization closing in on us, Russell's end-of-life thoughts are worth considering.

[Thanks to Judith Staples for linking to this video.]