Home About Subscribe Teaching Guide
Democratic Voters and Dependency
Uganda and anti-gay law: This (again) is why you don't put basic human rights to a vote.

More on the Politics of Dependency

A previous post asked whether Democrats were the party of goof-offs and dependents. The evidence seems to point differently.

Larry Saboto argues that "The higher the education level, the more likely [citizens] are to vote Democratic." The graph below illustrates the huge difference between Democratic and Republican states in terms of education: 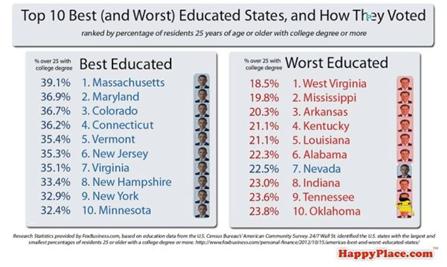 Does more education signal hard work, dedication, and responsibility? Are people with greater educational achievement more or less likely to be on the welfare rolls? [Of course, we cannot say that it was the educated voters in these states who pulled the lever for Obama; but I'm willing to bet that exit polls will likely show this, as argued by Sabato.]

Perhaps reflecting the education gap, one disappointed voter tweeted this week "I'm moving to Australia, because their President is a Christian and actually supports what he says."

[Irony intrudes: ;> Australia doesn't have a President; Prime Minister Julia Gillard is a woman. She is an atheist who lives with her unmarried partner.]

There's something about education that gets in the way of good ideology!

There's something about education that gets in the way of good ideology!


But often replaces it with another. ;)