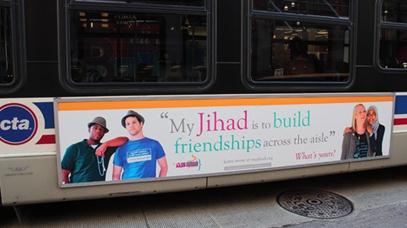 Public education campaign called MyJihad featured in an advertisement on the side of a Chicago bus. (Courtesy of myjihad.org).

In an op-ed in the Washington Post, attorney Qasim Rashid helps us to understand the true meaning of Jihad:

As a Muslim American, #MyJihad begins every night—get to bed on time so I can wake for pre-dawn prayer and nourish my soul. #MyJihad is not skipping a healthy breakfast—as our Starbucks society is prone to tempt—and thus properly nourish my body. #MyJihad ensures I spend time daily in service to humanity—charity, volunteer work, and mentoring—to nourish my personal moral development. And finally, #MyJihad is to read and learn about ideas that challenge my thinking—to nourish my intellect and foster pluralism.

And all the while, #MyJihad reminds me to treat those who malign, misdirect, and misinform Americans about jihad, with respect and decency—because that is the example prophet Muhammad set for all Muslims. As an American Muslim, #MyJihad is to properly define jihad with my actions of service and love—never hate.

So what is #MyJihad? It is a grassroots public educational and service campaign started by MyJihad.org. The campaign is designed to provide a unifying storm with bus ads, on Twitter, YouTube, Facebook, and news media. It is an inspiring phenomenon, as people of all walks of faith affiliation and non-affiliation—Muslim, Christian, Hindu, Jew, atheist, and more are uniting to share their struggle towards self-improvement and overcoming the odds in their lives.

#MyJihad defines jihad correctly as—not holy war—but struggle…. [O]nce upon returning from battle, Muhammad remarked, "We are returning from the lesser Jihad to engage in the greater Jihad—the Jihad against the self."

Seen in this light, jihad is the virtue ethics of self-control. Mohammed, a merchant, interacted with many people and understood that getting along meant learning to respect differences, especially in religion.

They say cutting wood warms you twice. And so does international trade: it makes you warmer in wealth and potentially warmer in worldview.