My co-blogger Mark White questions the need for economics to be considered a science.

Along similar grounds I will ask whether there are enough outstanding discoveries in economics to warrant a Nobel Prize every year?

The first Nobel in economics was awarded in 1968, technically today called the Sveriges Riksbank Prize in Economic Sciences in Memory of Alfred Nobel. 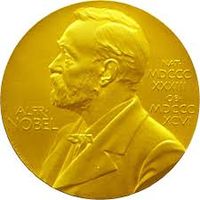 Given that only living people can win the Nobel (which seems a crying shame), the first ten or twenty years had plenty of 20th century breathing giants to celebrate—Samuelson, Friedman, Hayek, Arrow and others.

I’m not saying we are now scraping the barrel.  Eugene Fama, Robert Shiller, and Lars Peter Hansen who won this year made great contributions.  But the contradictions between Fama and Shiller demonstrate how uncertain those contributions might be.

“Copernicus [Shiller] was right and Ptolemy [Fama] was wrong. There are not, and will not be, equivalent certainties in economics, and if such certainty is the hallmark of science – I do not think it is – then economics is not a science. The resulting insecurity seems to lead the Nobel committee to claim more for the subject of economics than it has achieved.”

I am waiting for the time the Nobel Committee announces that no one has won that year, out of respect for truth and humility for what we think we really know.

Posted at 08:08 AM in Academia, Economic theory, Nobel Prize, Posts by Jonathan B. Wight | Permalink | Comments (0)