“The Stone Age didn’t end because we ran out of stones.”

Thomas Friedman at the New York Times can be irritating and boring, writing his books on the tarmac as he jets about the world.  The level of critical analysis, once deep and enriching, has disappointed in recent years as his fame has grown.

Occasionally he makes good points.  Yesterday’s column points out an important truth: Putin’s economic power rests on oil and gas, both hydrocarbons that are so 20th century.  The 21st century will likely and hopefully make the transition to alternative forms of solar power.

Friedman notes: “The former Saudi oil minister, Sheik Ahmed Zaki Yamani, once warned his OPEC colleagues something Putin should remember: ‘The Stone Age didn’t end because we ran out of stones.’ It ended because we invented bronze tools, which were more productive.” 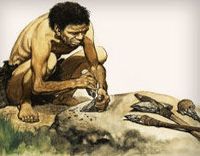 Whether it takes 20 years or 40 years, Russia’s long term future is not in doubt: it has to diversify or continue down the path of a dying state, admittedly with lots of weapons.  To change its course will be difficult if not impossible because one does not build a 21st century economy by restricting people’s freedoms.