Economics After the Crisis 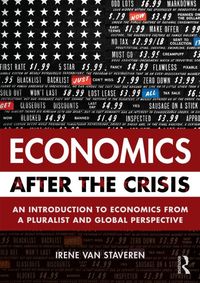 A year after the fall of Lehman Brothers, The Economist's headline proclaimed the end of modern economics. What has happened since? Well... almost nothing.

Mainstream and near-mainstream economic textbooks still sell like before. And INET has supported some initiatives that eliminate the rough sides of neoclassical thought and neoliberal policy advice. Very laudable initiatives, with, for example, Wendy Carlin's work on developing a new undergraduate curriculum CORE. But students of economics are not satisfied with these minor changes, so many years after the start of the financial crisis. Their Rethink Economics petition demands more fundamental changes to textbooks.

As a supporter of every single petition, pamphlet, op-ed, and plea for pluralism in economics before and after the crisis, I decided three years ago that I should practice what I preach. The result is Economics after the Crisis, a pluralist introductory textbook published by Routledge in January 2015. It offers a tool to understand the basics of economics from four theoretical perspectives either for use in the classroom or for self-study alongside a standard course book. The theories are presented in every chapter, micro and macro. And from interdisciplinary and close to real-world experiences to mathematically in an idealized world of perfect markets and agents following the single ethical guide of utility maximization. The book presents social economics, institutional economics, post Keynesian economics, and neoclassical economics and thereby shows that almost no economic concept or tool is theory-neutral. If only this message gets across, the book will have accomplished already more than I could hope for.

The window of opportunity to reform economic teaching is almost shut. Banks pass stress tests in Europe and the US while still being too big to fail. Nobel Prizes are awarded to economists who show no effort at all in rethinking economics. And economic policies ignore the danger of continuously increasing private and public debt, while shifting the consequences of such myopia on disadvantaged groups and whole populations.

If it is not now, we may have to wait for the next crisis to change economic thinking and teaching. I truly hope that the combined efforts of critical economists, activist students, and courageous teachers will help to make the change. We cannot afford to standby any longer.