One state breaks up labor unions, cuts government spending, and  lowers taxes in an effort to attract more business investment and grow faster.  This state is led by a governor touting his moral rectitude.

A nearby state raises taxes and boosts the minimum wage.  Isn't that a job killer?

Okay readers—which state do you think is doing better seven years after the Great Recession?

The answer is the second state—at least comparing Wisconsin and nearby Minnesota.  Both states have about 5.5 million in population, and both states have legacies of mining, agriculture, and manufacturing industries.

Scott Walker, the Republican governor of Wisconsin, has taken a slash-and-burn approach with labor unions and state government, championing himself as Reagan’s reincarnation.

Yet his state lags economically behind Minnesota, where Governor Brandt Dayton (of the Democratic-Farmer-Labor Party) has erased the state’s budget deficit by asking well-off citizens to pay a higher tax rate.  And he's helped low income workers who have a job by raising their wages.  Unemployment rates have plummeted despite this.

In “A Tale of Two States,” Randi Weingarten lays out the diametrically different policies.  Weingarten is certainly not unbiased,

as president of the American Federation of Teachers. So I decided to check out the data for myself.  Here’s what the St. Louis Fed reports:

Although Wisconsin has a slightly larger population, Minnesota’s economic output is larger and on a faster growth trajectory (at least for the last year of data available): 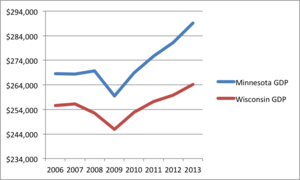 Hence, GDP per capita is higher as well in Minnesota: 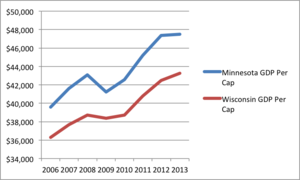 And finally, Minnesota’s unemployment rate is below Wisconsin's and the national average: 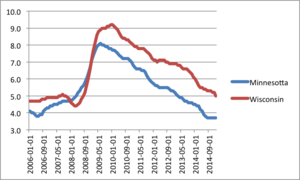 The upshot is that one does not have to try to destroy labor to be successful. Perhaps this is too pie-in-the-sky Keynesian, but having a more equal distribution of income raises middle class opportunities, and makes a state more attractive to business on several levels.  One of these is simply on the basis of higher demand from more middle-income families.

Claiming moral rectitude—by insisting that the upright thing to do is to lower wages—seems misplaced.  Adam Smith certainly worried that the countries going most rapidly to ruin were the ones where the profit rates were the highest and the wages the lowest.

[Thanks to T. Venker for this link.]