Free Speech is Not Free

Walter Williams expresses some thoughts that should be aired about the vile Sigma Alpha Epsilon fraternity video at Oklahoma State. 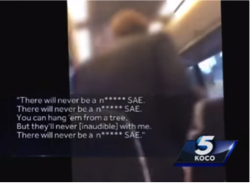 In that video it was advocated that “n_ggers” be strung up.  Abominable.

The bottom line is that free speech is not free: it requires incurring the cost of listening at times to people expound vicious and ignorant views.

At the risk of accusing Mr Williams (and Professor Wight, by proxy) of invoking a straw-man argument, I think it bears remembering that at no time did the young men in Oklahoma face the peril of criminal charges. In other words, the next challenge to their first-amendment rights will be the first.

In yet other words, freedom of speech does not free the bigot, the monster, the fool, and their fellow iconoclasts from the social consequences of their respective expressions.

Agreed. I am encouraged by the show of solidarity of students who marched, and the football team members who protested. So the social consequences are important. What I object to is that students were threatened with expulsion from the university for saying stupid and derogatory things. Best, JW

Well, they weren't just threatened, we they? Two of them were, in fact, expelled. Regardless of whether one approves of this outcome, their right to free-speech, as guaranteed by the Bill of Rights, was not violated.

Is Oklahoma State an agency of the government? If so, does that change your conclusion?

One can say that state colleges get very little state money any more, so there are often more private than public.

But depriving someone of a state right (to education) because of their speech, strikes me as a form of government punishment. What do you think?

I'd agree, but for the lack of a state-guaranteed right to education. Students at public universities can be expelled for all manner of non-academic and non-criminal reasons.

I think it'd be entirely worthwhile to have a debate over whether to expand the first amendment to include and individual right to government-backed advancement of personal views, but until we do such a redefinition, folks like these poor kids will have to use their own ample resources to construct their figurative soapboxes.