Monuments and Flags – Hate or Heritage?

The rushing debate about the Confederate flag and related monuments to the Civil War are particularly meaningful in my neck of the woods—Richmond, VA—the capital of the Confederacy and the largest slave-trading city outside of New Orleans. 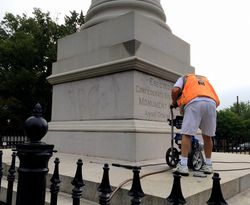 There is lots of vitriol, exemplified by the recent defacing of numerous statues around town.  The photo shows a workman removing graffiti this Sunday morning from the Confederate Soldiers and Sailors Monument on Libby Hill Park, a few blocks from my home.

But there is also lots of overdue discussion and dialogue taking place. The move to eradicate Confederate symbols from our daily life is gratifying and uplifting if it reduces the systematic opportunities for the spreading of hate and division.  The battle flag is the most obvious target and is rightfully being removed as a public symbol around the country.

Monuments are a more difficult issue.  The famous statue of Robert E. Lee mounted on his horse Traveler that adorns Monument Avenue in Richmond represents a special case for three reasons. 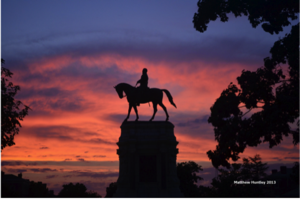 First, Lee’s conduct after the surrender at Appomattox shows that he genuinely reaffirmed his pledge of allegiance to the United States and later sought to strengthen the union rather than undercut it.

Second, Lee promoted racial harmony through personal acts, such as the apocryphal story of his kneeling alongside a black parishioner to receive communion at St. Paul’s Church.  This is not to suggest he believed in racial equality, but he did believe in basic dignity.

Third, and most important, Lee went on after the war to lead Washington College as a modern educator, transforming a sleepy and outdated curriculum and paving the way for Washington and Lee as a premier liberal arts institution.  We continue to celebrate Lee’s life because it affords us an example of someone who struggled, lost, and redeemed himself through humility, learning, and growth.

In short, Lee represents the heroic life not because he lacked faults, but because he strove to overcome them and provide a positive legacy for society.  (For more on this topic, read an excellent essay by Ken Ruscio from Inside Higher Ed.)

The same cannot be said for those who continued to foment rebellion in the Lost Cause. A recent Richmond Times Dispatch editorial nailed it: remove those statues, such as the one of Jefferson Davis on Monument Avenue, that uphold a “vainglorious exercise in self- and national justification” for slavery.

History is our collective past, and the telling of history always goes to the victors. Let there be reconciliation without gloating, reflection not vitriol. We are not the Taliban, tearing down statues at will, but we can judiciously remove and replace some monuments to better reflect our evolution as a society.

There are plenty of other great heroes to celebrate instead: A statue of Maggie Walker, long on the planning list, seems overdue on Monument Avenue. A statue of Lincoln and his son was a welcome addition to the Richmond landscape in 2003.

I have a hard time wrapping my head around the dichotomy between 'heritage' and 'hate' in these discussions. Why exactly are these two ideas supposed to be mutually exclusive? I guess it's mainly because we've never really tried to reckon with slavery since the mid 1870s, and the effects of our collective head in the sand explain pretty much all of the so-called 'problems with race' since.

We've got dozens of Holocaust memorials and museums in the United States, which I think is a reflection both of the long history of Jewish culture in the US and of the role the US played in ending the Holocaust. On the other hand, we've got very few memorials to slaves, and virtually no museums to teach this important, painful, and essential part of our nation's history.