The economist and columnist Walter Williams is a smart guy, but I often disagree with him on philosophical and policy issues.  Williams is famous for pushing the “greed is good” view of capitalism, and then incorrectly attributing it to Adam Smith. I previously blogged on this point here.

Nevertheless, his autobiography, Up From the Projects (2010) makes for fascinating reading.  He is a hardworking kid who comes of age in Philadelphia during the 1950s, still an era of segregation in the South but opportunities opening up for enterprising “Negroes” in Los Angeles where his father is living.

Williams is a mediocre student and works in numerous jobs to support his entertainments.  His mother, a saint, works part time as a “domestic servant” and is a harsh taskmaster to her two kids. 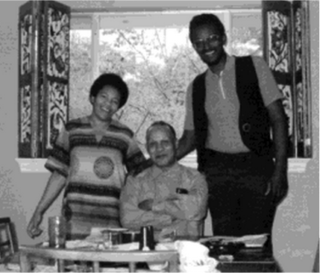 [Walter with his father-in-law and wife Connie in their first home in Chevy Chase, Md.]

Walter has a hard and demanding personality, which leads to his arrest for disorderly conduct as a cab driver.  Williams probably wasn’t guilty of the charge, but his behavior exacerbated a confrontation with a police officer.  He is also an inveterate wiseass and prankster, causing trouble in school and in the Army when he was drafted.  He fights segregation in the South by refusing to give up his seat on a Greyhound bus to a white woman, and in the Army by crashing a whites-only dance.

He notes: “I would be provocative and aggravating, but not enough for them to bring serious charges against me”—at least at first. Williams acknowledges that his behavior was often “reckless.”  He is later court marshaled for failing to obey an order but acquitted. His acrimonious personality and his constant needling the Army about segregation is his constant companion.

Williams also admits that he did not take the feelings of others very seriously, and that his wife Connie played an important role in “civilizing” and “humanizing” him, by expanding his moral sentiments.  My own impression, having read some of his other work as well, is that Williams gets pleasure from causing consternation to others, and that is not a particularly worthy aspiration.  He admits to lying repeatedly to get out of troubles, including unpaid parking fines.  He is a scofflaw, and enjoys it.

During graduate school at UCLA he notes that he “probably became a libertarian through exposure to tough-minded professors who encouraged me to think with my brain instead of my heart.” He claims that, “I have never used my class for proselytizing students, as so many professors do. I think that’s academic dishonesty.”

But in the next sentence he goes on to say, “Personally, I want students to share my conviction that personal liberty, along with free markets, is morally superior to other forms of human organization.” Saying “I want students to share my conviction” is essentially an admission that he has an ideological mission, which implies he is proselytizing because he has an end goal in mind for his students’ intellectual choices. Everyone has a bias, and mine as a teacher is to create opportunities for students to think critically, without (I hope) desiring that they share my ideological convictions.

There is a lot of interesting economic history here, such as how Thomas Sowell, a friend of Williams, came to become an expert on ethnic economic success in America. Williams stays true to his free market beliefs and refused to accept academic appointments that he thought were motivated by affirmative action. This is the most moving part of the book, when Williams at Temple University tries to get other faculty members to stop coddling black students and to hold them accountable for their academic failures.  He goes on to do the same thing when lecturing in Africa.

Up From the Projects provides an illuminating look into the life of a well-known and cantankerous economist, covering some interesting aspects of American and economic history.