We know that social scientists (including historians) have points of view that limit what they can see, and ideologies sometimes lead the way in reformulating what is written.

For example, Bishop Shelby Spong of the Episcopal church has long maintained that the gospel writers of the New Testament after apostle Paul began to invent or elaborate Jesus’ background and actions so as to better fit the predictions of the Old Testament and bolster support in the early church. 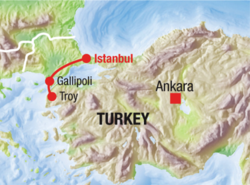 Yucel Yanikdag, a colleague and professor of history at the University of Richmond, demonstrates how an ideological mindset is changing how Turks today view the historic Battle of Gallipoli, celebrating its 100th anniversary this year. The implications are wide ranging.

Gallipoli is a spit of land on the northern side of the Dardanelles, a narrow strait separating Europe from Asia (today part of Turkey).  The strategic importance of the strait allowed the Ottomans to control the flow of ships into the Sea of Marmara, and beyond that, to Istanbul and the Black Sea.

During WWI, the Russians were allied with Britain and France, but the Russian fleet was bottled up.  The British and the French attacked Gallipoli first by sea and then by land over several months in 1915. They eventually withdrew in defeat with horrendous casualties on both sides.

The end of WWI led to the collapse of the Ottoman Empire and its lands doled out to the Allied victors.  Mustafa Kemal had been an officer in the Ottoman Army, and pushed for nationhood

that came in 1923. Mustafa Kemal became Turkey’s first president, given the honorary title of “Ataturk”—“ata” meaning “father” of the Turkish nation.

Ataturk’s legacy was to modernize the country and create a secular government not bound by Islamic law.  He was quoted saying, “We must liberate our concepts of justice, our laws and our legal institutions from the bonds which, even though they are incompatible with the needs of our century, still hold a tight grip on us.”

With nationalist hindsight, the Gallipoli Campaign began to be viewed as a defining moment in the struggle for Turkish independence. Consequently, a “secular-nationalist” narrative about the battle and Mustafa Kemal’s role in defending the country against the allied invasion took on a life of its own. Mustafa Kemal was a hero of the battle. 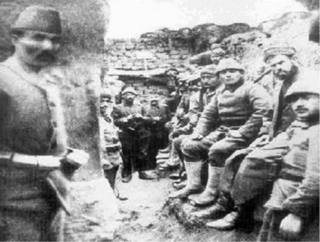 One hundred years later, Turkey is caught up in the rise of Islam. The current president, Recep Tayyip Erdogan, who courts favor among Islamists, has tried to undo the separation of church and state. As Yucel Yanikdag demonstrates in “The Battle of Gallipoli: the Politics of Remembering and Forgetting in Turkey,” a new religiously-inspired view of Gallipoli seeks to change its meaning for the Turkish people.

Mustafa Kemal, the evil perpetrator who abolished Islamic law, has to be brought down. Hence his role in the Gallipoli defense was almost completely diluted—he was either a lowly officer, or he was even absent from the fight.  In terms of casualties, the religious-inspired ideology claims that 400,000 Turks died defeating the Christian invaders (the greater the casualties, the greater the importance of this victory for Islam).  Official figures put the death toll at less than 60,000.

Yucel Yanikdag’s important work reminds us that those who are driven by ideology do not let facts get in the way of a good story.  In America, we have our own ideologies that limit what we can see and the facts we remember or invent.