Cartoonist Dan Perkins, who publishes under the pen name “Tom Tomorrow” has funny and insightful, if woefully one-sided, looks at corporate life.

Since Perkins doesn't know much history of
economic thought, he makes the same mistake that many econ teachers do, assuming that Adam Smith’s invisible hand was at the service—the beck and call—of big corporations.

Hence we see supposedly well-trained economists opining that “greed is good,” and ascribing this to Adam Smith!  Readers of this column know this to be unmitigated, destructive bunk.

Perkins, the cartoonist, is wickedly funny, 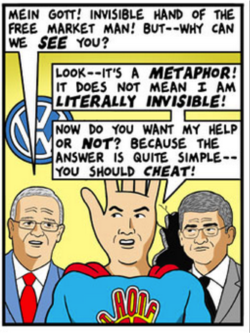 and has devised a Superman-like invisible hand that comes to the rescue whenever corporate fat-cats need bailing out.

A recent cartoon deals with the fiasco of VW’s jerry-rigged diesel motor computers, designed to lie during environmental inspections.

To see other episodes, go here.

[Thanks to Steve Nash for the link.]

One could argue, Jonathan, that the root "Adam Smith said 'greed is good'" notion lies at the feet of the Adam-Smith-tie crowd in the 70s and 80s (mainly the sort of easily-caricatured corporate dunderheads and a particular brand of hacks impersonating economists).

Very good, Jonas! In the past I have named-names of those who defile Smith's legacy, but didn't in this post. It is now pretty widely known, and the people who claim the greed-is-good for Smith embarrass themselves in today's world. So there is progress!