As Charlottesville imploded yesterday, thousands of people of all races gathered 70 miles away to celebrate ideas that unite us—the sounds of blues, jazz, and everything in-between at the Richmond Jazz Festival.  The races of humanity mingled, laughed, shared food and fans, danced, and enjoyed each other’s company. 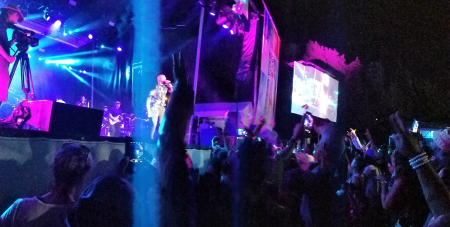 Like the white supremacists who came from all over the country to C-ville, people came from New York, Baltimore, Chicago, and elsewhere to hear music in the bucolic Maymont park, a tranquil setting where people sweltered not from the rhetoric and pepper spray but from the sun peeking out from rain clouds.

Like the March on Washington last January, the Jazz Festival exuded an aura of love and acceptance—you would have felt it, too.  Such moments, when they happen, must release oxytocin, the bonding hormone, that makes everyone in your sight a family member, one of the tribe, regardless of exterior manifestations of race, gender, or nationality.

In C-ville, as opposing groups verbally and physically clashed, no doubt oxytocin was repressed in favor of testosterone, which leads people to do crazy, rage-full things like drive your car through the crowd, causing death and injury.

The horror of C-ville is that it didn’t have to happen.  What if the white supremacists marched—and nobody came, their exploits ignored by television and other media?  That would have been a fitting end to their misguided quest for attention.

Jim Bacon, of Bacon’s Rebellion, notes that you can oppose affirmative action while denouncing the tactics and ends of the white supremacist movement:

“Hey, white nationalists, go away. We don’t want you. Nobody wants you. I, too, am a white person, and I, too, am appalled by the identity politics of the Left. But the answer is not to match La Raza and Black Lives Matter with an identity politics of right-wing whiteness. You and your torch-light marches only fuel the Left’s narrative that America is an irredeemably racist nation.

"The opposite of left-wing tribalism isn’t right-wing tribalism, it’s individualism. If you want to stand up to Leftist identity politics, work to build a society that provides equal treatment under the law to all and empowers Americans to rely upon their own initiative, not the government, to better their condition."

The photo above shows Lonnie Rashid Lynn, a.k.a. “Common,” performing with the Richmond Symphony last night.  Who could have believed it—a hip hop rapper coming together to make music with a classical orchestra?  But it’s true.  Common improvised, bringing in new lyrics about the C-ville event, stopped for a moment of prayer, and shouted out the desire for inclusiveness—we’re all in this together.

People can unite to resolve their differences, learn new things, and make new institutions for progress.

But how to create the frame of mind in which this is possible?  One approach is to practice releasing oxytocin, through meditation and other activities that enable us to forgive others from the heart.  (And to forego listening to hate radio that fuels the toxic release of testosterone.) It’s not rocket science. It does take patience and persistence.  And I'm sure a change of heart is just the beginning, requiring much more of all of us, to make a nation of egalitarian opportunity.

Bacon sounds scared, and he probably should be. Conservatism has harbored this stuff for a long time, and the emergence of Trump is making it hard to keep pretending that pseudo-ideas like "states' rights" and "small government" are about something more than bigotry. All of his crude false equivalency aside, the Right invented identity politics, and has mastered it in a way that the Left cannot imagine.