Everyone knows about China’s famous bridge building campaign, resulting is some of the world’s most amazing architectural feats.  These are exploits of pride, as well as engines of development, and in some cases, sources of political power and control.

But who has heard of Sicily’s new infrastructure?

Sicily, going back to the Greeks, has traditionally emphasized its ports. Inland travel has often been slow and difficult, making economic development—and commercial, political, and social integration—more difficult.  No surprise that the people from Palermo don’t see eye to eye with the people from Catania, and so on.  There may have been a Kingdom of Sicily, but each of the nine provinces has its own history and story.

Enter the EU, and its subsidies for poorer regions like Sicily.  The island has been at the teat quite a bit, according to published reports. Our cab driver from Catania to Siracusa also observed that there was a giant tunnel on our route, paid for with EU funds, when there were no mountains or other obstacles to get around or under!  It was pure waste, enriching insiders with construction and architectural contracts.

Driving across the middle section of the country this week, we encountered a number of stunning bridges that must have cost a fortune (see photo).  These were soaring over valleys, seemingly hundreds of feet in the air. 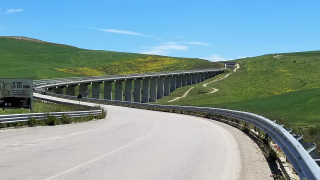 Without the bridges, cars would go the old-fashioned way, winding in switchbacks over hills, at much slower speeds.  Yet the destinations of these roads did not seem to warrant the extravagance.  The one pictured here was on a provincial road (SP138) to Petralia Sottana (pop. 2,766), Petralia Soprana (pop. 3,200), and other similar tiny places.

The biggest boondoggle potential infrastructure project is the canceled Strait of Messina Bridge, that would have connected the island to the toe of the mainland’s boot.  At a projected cost of over 6 billion euros (there would surely be overruns), the structure would be the longest suspension bridge in the world, at about 2 miles.

But critics point out that the supply chain advantages of the bridge are slight, particularly because infrastructure on either side of the proposed structure are also lacking!  This would be a bridge to nowhere.

Sicily’s development may benefit from well-planned infrastructure projects, but the potential for corruption and abuse seem pretty high: the wrong things, built in the wrong places, may be the result, leading to more cynicism and fatalism.