Legend has it that Saint Lucia (283-304 AD) of Siracusa (Syracuse, Sicily) was born into a wealthy family, and vowed to save her virginity for God.  However, after her father died, her mother betrothed her to the son of a pagan family.  Lucia opposed the marriage, and after the mother’s miraculous healing from a bleeding disorder, the mother agreed to Lucia’s plan to give away her dowry to the poor.

The angered suitor reported her to Roman authorities, who arrested her for being a Christian revolutionary.  Lucia, barely 20 years old, resisted being thrown into a brothel and was murdered with a dagger in her throat (see  photo). So much for cheeky women!  Yesterday, St. Lucia was celebrated in Siracusa, Italy, but perhaps not for her generous spirit to the poor, or her defiance of male authority.

People were seeking something to believe in, wanting there to be a blessed life, a miraculous cure for blindness, pain, and suffering. Children were raised up to touch the hem of her robe, as if it would impart an elixir of protection. The crowd shouted “Viva Santa Lucia!” as doves were released into the sky. 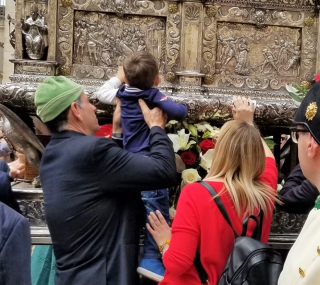 What would St. Lucia think of all this?  Perhaps she would wonder if her magnificent silver statue should be melted down and used to feed the homeless?

Sicily, which in olden times was a rich kingdom compared to the then-impoverished northern Italy, is today one of Italy’s poorest regions, with high employment and underemployment. Yet Jesus, when Mary anointed him with the ridiculously expensive perfume of pure nard—trekked in caravans from Nepal 3,700 miles away from Jerusalem, and costing a year’s wages!—admonished his followers that “You always have the poor with you, but you do not always have me” (John 12:1-11 NRSV).  It was okay to venerate and celebrate the divine.

Yet it is not clear to me how this veneration, joyous and moving as it was yesterday, fulfills the Second Commandment to “not make for yourself any idol, nor bow down to it or worship it.”  A graven image is “a carved idol or representation of a god used as an object of worship,” and clearly that is what Lucia’s statue is—and many others like in Christian shrines and churches.

As much as we claim to be denizens of the 21st century, we long for the early human connection to the belief in potent magic. Perhaps that’s not a bad thing, given the documented power of placebos to cure a multitude of maladies, and the role of belief and faith generally in the successful conduct of human affairs.

In that spirit, Viva Santa. Lucia!

[As an aside, the beautiful Italian song, “Santa Lucia,” has nothing to do with the saint, only with a so-named sailboat in the Naples harbor.]