Thank goodness, Herman Cain and Stephen Moore have withdrawn their names from consideration for appointment to the Federal Reserve Board.  Neither appears to know a lick about monetary policy.

Honest and smart people can learn fast, but neither of these two appears to be interested in learning anything that would go against pre-conceived beliefs.  In Moore’s case, he does not appear to have beliefs, and flip-flops his views wildly depending on who sits in the White House.

Moore’s claim that a monetary rule can work better than monetary discretion may have some intellectual standing, however, going back to the gold standard or Milton Friedman’s monetarism.  (I had an excellent monetarist teacher in college, Tom Havrilesky, who was a devoted fan in the mid-1970s during the heightened inflation era.)

Friedman’s claim, which he maintained until the early 1980s, is that money demand is a stable function of a small number of variables 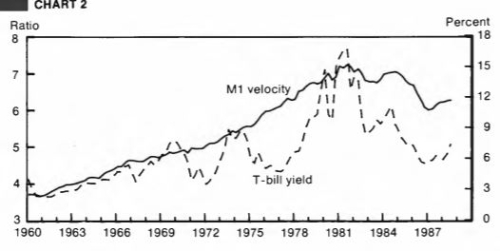 that can be predicted, and hence that the rate of spending of money (velocity) can also be relied on to grow at a fairly constant rate.  The chart here shows this reliable and steady growth in M1 velocity from 1960 through 1980.  Who could blame Friedman for thinking he’d found an elixir?

All one needed to do, in this scenario, is increase the money supply by a constant rate that would account for the steady growth in velocity, the steady growth of real GDP, and the desired rate of inflation.  (See a numerical example at bottom.)

But what happened after that is legendary.  Suddenly in the early 1980s the economy tanked (when the Fed raised rates to fight inflation).  People began increasing their holdings of money for precautionary reasons.  The demand for money soared and velocity fell.  The following decades (see second chart)

have made it clear that no one can predict in advance why or when people will hold money and when they will spend it.  Hence, no monetary rule works very well, and thus perhaps we do need real people to use their experience and their discretion to guide monetary policy.

Of course, the situation is far more complex than outlined above.  M1 is probably not the right money measure to use, and there are other potential rules not covered above.  But the general principle remains the same, that someone has to mind the store.  We don’t have self-driving cars (yet), nor do we (yet) have a self-driving monetary policy through gold or rules.

Does this mean that those guiding the Fed will make mistakes?  Of course.  Those mistakes have to be weighed and compared against the disasters that would likely occur with a rule.

The notion that Moore is off base is backed up by examining the letter signed by 100 economists in support of Moore.  Of the group, 24 are retired.  Of the remaining active economists, none are

Rankings of schools are somewhat arbitrary and there are excellent economists at lower ranked or unranked schools. I used the RePEc rankings (and alternative rankings can be found on the AEA’s website here).  Regardless of the rankings methodology, I think the evidence is fairly robust: Moore did not have the backing of the vast majority of mainstream economists who are active and widely published. Moore is a denizen of political theater, and knows little about central banking or evaluating the quality of research that lies at the heart of Fed economics.

It degrades the Fed and its independence to nominate a charlatan to the Board, or indeed for any position of trust that requires ethics and honesty.  We dodged a huge bullet this week.

Numerical Example of a Monetarist Rule:  Start with the Equation of Exchange: MV=PQ.

Look first at the right hand side.  Suppose real economic output (Q) can grow by 2% (due to labor force growth and new capital investments).  If the targeted growth of prices (P) is also 2%, that means that nominal GDP will be growing about 4%.  On the left hand side of the equation, suppose that financial innovations like ATMs make the public more astute about money use, hence the rate of spending of each dollar in circulation (V) can grow by about 2% a year, let’s say.  To make this equation hold, money will need to grow by about 2% a year.

Voilà! We don’t need any Fed bureaucrats to use their discretion, we just need a monetary rule that money should grow by 2% a year.  A computer can do that!  Of course, all of this is predicated on the alleged stability of V, which in hindsight is not stable at all.  Read Chapter 12 in Keynes’ General Theory to get a good idea of why money demand can be fickle.