Economics and Religion in the Ottoman Balkans 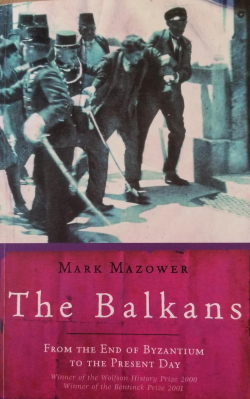 Mark Mazower presents a fascinating look at the area today known as the Balkan Peninsula, in The Balkans: From the End of Byzantium to the Present Day (Weidenfeld & Nicolson, London, 2001).  The “Balkan” name for the region in Southeast Europe, he argues, is a misnomer for several reasons:  geographers would not say the area is a true peninsula, and the Balkan Mountains appear mainly in Bulgaria, not the entire region.

The book is an essential read for understanding the historic conflicts in the region over the millennia.  One particularly interesting section reports on the economics and ethics of religious practices.  When the Ottomans took over parts of the Balkan area, they allowed Christianity to remain alongside Islam (albeit Christians were second class citizens in some respects).  This coexistence led to some interesting marriage practices regarding economics, competition, and law (pp. 60-61):

“The most intimate areas of personal life were shaped by this coexistence of religions.  Christian church attitudes toward marriage, for instance, faced unexpected competition.  Under Islam, both polygamy and forms of temporary marriage contracts were available, divorce was easier to obtain (especially for women), and sex was neither confined to marriage nor validated solely by procreation.  There was little question which religion possessed the more intrinsically attractive possibilities.”

Aha.  So people could shop around and find the “best deal” in a religion!

“The church hierarchy appears to have held the line on polygamy (which was, in any event, not common among Balkan Muslims); but temporary marriages were a different matter.  The practice of contracting a liaison with a woman for a specified sum over a limited period, noted as early as 1600 by William Biddulph, had a natural appeal to Christians as well as Muslims.  Eventually the church was forced to acquiesce in this practice, which became fairly widespread during the eighteenth century.”

And there are unexpected consequences, leading to legal prostitution!

“In some areas, it turned into a means of earning a dowry, a kind of legitimized prostitution: ‘If a stranger should wish to enjoy anyone of the young unmarried women,” noted a bemused Lord Charlemont in the Cyclades, he addresses himself immediately to her parents, and demands the girl in marriage.  The bargain is presently struck, and the couple are brought before a magistrate, where they swear mutual fidelity during the man’s residence on the island, the bridegroom engaging to pay at his departure a great sum of money, as well as a present advance…. This money is set apart in the girl’s portion, and with this, upon the departure of her consort, she soon procures herself a real husband among her countrymen, who esteem her not a whit the less for this previous connection, deeming her a widow to all intents and purposes.  This was the adaptation of Islamic practice by Christian islanders for their own convenience, ratified by Turkish officials and tolerated by village priests.’”

“Aside from this specific device, marriages took place between Muslim men and Christian women in the Balkans as long as the Ottoman empire survived.  The result was that many Muslims had Christian mothers, and hence a private familiarity with, and sometimes attachment to, the maternal religion.”

Finally, the transaction costs of getting out of a legal marriage were lower under Islam, affording women greater power and autonomy (which might be surprising to some):

“Conversion offered Christian women trapped in unhappy marriages particular advantages.  By converting to Islam, they automatically obtained an annulment of their marriage, unless their Christian spouse converted too.  There was special formula for this.  ‘Cako was honored with Islam in the presence of Muslims,’ a cadi court heard, ‘and she took the name Fatma.  Her husband was offered a chance to go to Islam but he declined.’  In a similar case, a woman names Fatma bint Abdullah registered her conversion to Islam, and it was noted that ‘my husband Yanno bin Manolya was invited to submit to Islam but he did not become a Muslim.  He acknowledges that he has no claim against Fatma.’”