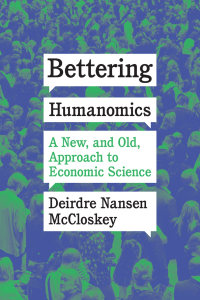 In case you missed it, there was a fantastic interview with Deirdre McCloskey—another of my main influences, as well as a longtime friend—conducted by Paolo Silvestri in the Spring 2021 issue of Erasmus Journal of Philosophy and Economics. Their discussion is wide-ranging and insightful, covering much of McCloskey's writing over the years, but a significant focus is on her book Bettering Humanomics: A New, and Old, Approach to Economic Science, released earlier this year by the University of Chicago Press.

In solidarity with Vernon Smith and Bart Wilson (including their recent book Humanomics), and all of them drawing ultimately on Adam Smith, McCloskey argues for a richer economics—"quantifiably serious, philosophically serious, historically serious, and ethically serious," as she writes in the preface to the book—that recognizes the subject of economics as human beings, not mathematical abstracts, which only gets us so far (and reasonable people can quibble about exactly how far that is).

McCloskey takes particular aim at behaviorism and positivism, "both top-down, infantilizing, as in nudging, and industrial planning, and other anti-liberalisms. And both are indefensible philosophically. And both are poor guides to understanding the economy" (p. 202 of the interview). For more on these points, see the discussion between her and Silvestri in the Journal of Institutional Economics (open access), which focuses more on her forthcoming book Beyond Behaviorism, Positivism, and Neo-Institutionalism in Economics (also from Chicago).