Updates to symposium on Reviving Rationality (Yale Journal of Regulation) 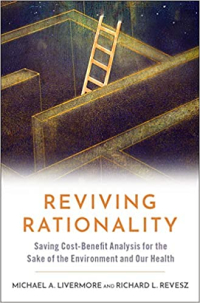 There have been some new contributions posted to the symposium at the Yale Journal of Regulation I posted about last week on Livermore and  Revesz's book Reviving Rationality: Saving Cost-Benefit Analysis for the Sake of the Environment and Our Health (Oxford, 2021).

"OIRA the Angel; OIRA the Devil," by Bridget C.E. Dooling

"Cost-Benefit Analysis as Policy and as Dialectics," by Shi-Ling Hsu

While Dooling and Shapiro focus in on the nature and politics of the Office of Information and Regulatory Affairs (OIRA) itself, Hsu's contribution is more abstract, addressing the possibility of alternative values and principles to welfarism in public policy and acknowledging the difficulties with balancing these different conceptions of what is good or right:

Perhaps the most serious objection to a welfarist, cost-benefit state, is that welfarism is just another value. Welfarism should stand alongside, and not above, other values such as equality, nondiscrimination, liberty, or freedom. Welfarism might even be subservient to some of these other values. Even welfarists acknowledge the importance of distributional issues, while they work to incorporate them into welfarist frameworks. President Biden has called for changes to CBA to account for distributional issues. Liberty and freedom are obviously fundamental to Americans, as well as other Western societies, as the Brexit vote may well indicate. So perhaps government isn’t even supposed to maximize welfare. It is supposed to reflect the values of a moral individual.

But this line of thinking then leaves unanswered the difficult and obvious question of what government is supposed to do about conflicts in values. What, indeed, is government to do to balance say, public health and safety against liberty and freedom? Personal responsibility against equality? Fairness against prosperity?

They join the first three entries in the symposium:

"Cost as the Ultimate Regulatory Restraint," by Jonathan H. Adler