Home About Subscribe Teaching Guide
Don Ross on economics' convergence with sociology (not psychology)
Kwarciński and Turek, "Can Normative Economics Be Convincing without the Notion of Well-Being?"

Oisin Suttle on "The Puzzle of Competitive Fairness" 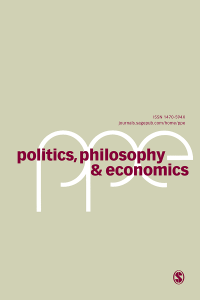 Forthcoming in Politics, Philosophy & Economics but currently available online (and open access) is "The Puzzle of Competitive Fairness" by Oisin Suttle (Maynooth University), exploring common intuitions about the concept of fairness as it applies to markets. (I find this very welcome, as the vague use of this concept in economics was one of the frustrations that drew me into economics-and-ethics in the first place.)

My method throughout is interpretive, in the sense advanced by Ronald Dworkin (Law's Empire: Ch. 2). We begin with a pre-theoretical account of a practice, identifying this inter alia through a number of paradigm instances. We next ask whether there is a principle or set of principles that could both explain and justify the practice, so conceived. To be successful, the required principles must both account for prominent features of the practice, and explain the value realized thereby. We can then return to our paradigm instances, and to any unclear or marginal cases, reassessing these based on our new, principled, understanding of the nature and function of the practice under examination.