Kwarciński and Turek, "Can Normative Economics Be Convincing without the Notion of Well-Being?" 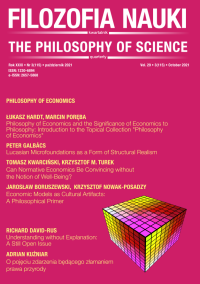 In the open-access special issue of the journal Filozofia Nauki (The Philosophy of Science) with the theme "Philosophy of Economics" (guest-edited by Łukasz Hardt and Marcin Poręba), Tomasz Kwarciński and Krzysztof M. Turek (Cracow University of Economics) ask the question, "Can Normative Economics Be Convincing without the Notion of Well-Being?"

In this article, we examine the notion of well-being in light of the relationship between positive and normative economics. Having identified four interrelationships between possible theoretical developments within the two fields, we propose a framework for the analysis of normative economic theories. The starting point for these considerations were competing stances on well-being proposed by neoclassical welfare economics, Robert Sugden, Amartya Sen, and Daniel Hausman.

Near the end of their introduction, they preview their contributions: