New book: Grivaux and Badiei, The Positive and the Normative in Economic Thought 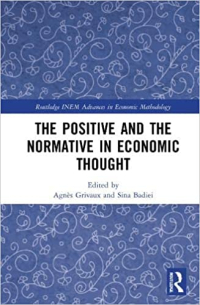 Coming out in June from Routledge is a new book titled The Positive and the Normative in Economic Thought, edited by Agnès Grivaux and Sina Badiei:

The book responds to the need for greater clarity regarding the relationship between descriptive, evaluative and prescriptive approaches within positive and normative economics. It also analyses the entanglement between evaluative and prescriptive perspectives within several theoretical frameworks in normative economics such as social choice theory, the capability approach, behavioural welfare economics and various theories of justice.

Given the scope of questions treated in this book, it will be of interest to economists, historians of economic thought, political philosophers and philosophers of science, especially those interested in the philosophy and epistemology of economics.

The table of contents is very promising:

"The Positive and the Normative in Economic Thought: A Historical-Analytic Appraisal" (Sina Badiei and Agnès Grivaux)
"The Positive-Normative Distinction in the Classical Economic Methodology" (Michel S. Zouboulakis)
"Descriptions, Prescriptions and Norms: The Tripartite Classification of Economics by John Neville Keynes" (Gilles Campagnolo)
"Normative Economics and Its Enemies: Marx, Mises and Friedman" (Sina Badiei)
"Economics as a Normative Discipline: Value Disentanglement in an 'Objective' Economics" (John B. Davis)
"Realism and Deliberation in Normative Economics: The Fruitful Intellectual Dialogue Between James Buchanan and John Rawls" (Nathanaël Colin-Jaeger, Malte Dold, and Alexandre Gascoin)
"Normative Economics and Public Reason: Who Are the Addressees?" (Cyril Hédoin)
"Reconciling Normative and Behavioural Economics: The Problem That Cannot Be Solved" (Guilhem Lecouteux)
"The Unacknowledged Normative Content of Randomised Control Trials in Economics and Its Dangers" (Seán Mfundza Muller)
"The Positive, the Normative and the Marxian Heritage in the Early Frankfurt School" (Agnès Grivaux)
"Economics as Value-Laden Science: Lessons From the Philosophy of Science on the Normative/Positive Distinctions and Rational Choice Theory" (Magdalena Małecka)
"The Positive, the Normative and the Ontology of Social Problems" (Jesús Zamora-Bonilla)