New book: George DeMartino, The Tragic Science: How Economists Cause Harm (Even as They Aspire to Do Good) 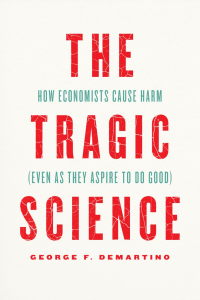 New from the University of Chicago Press is The Tragic Science: How Economists Cause Harm (Even as They Aspire to Do Good) by George DeMartino (University of Denver), the foremost expert in the professional ethics of the economics profession. (See, for instance, his wildly successful book The Economist's Oath as well as The Oxford Handbook of Professional Economic Ethics, co-edited with Deirdre McCloskey.)

From the publisher's blurb:

The practice of economics, as economists will tell you, is a powerful force for good. Economists are the guardians of the world’s economies and financial systems. The applications of economic theory can alleviate poverty, reduce disease, and promote sustainability.

While this narrative has been successfully propagated by economists, it belies a more challenging truth: economic interventions, including those economists deem successful, also cause harm. Sometimes the harm is manageable and short-lived. But just as often the harm is deep, enduring, and even irreparable. And too often the harm falls on those least able to survive it.

In The Tragic Science, George F. DeMartino says what economists have too long repressed: that economists do great harm even as they aspire to do good. Economist-induced harm, DeMartino shows, results in part from economists’ “irreparable ignorance”—from the fact that they know far less than they tend to believe they know—and from disciplinary training that treats the human tolls of economic policies and interventions as simply the costs of promoting social betterment. DeMartino details the complicated nature of economic harm, explores economists’ frequent failure to recognize it, and makes a sobering case for professional humility and for genuine respect for those who stand to be harmed by economists’ practice.

At a moment in history when the economics profession holds enormous power, DeMartino’s work demonstrates the downside of its influence and the responsibility facing those who practice the tragic science.