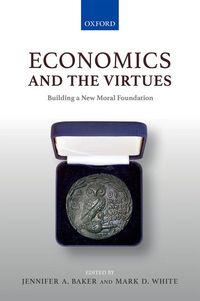 Our readers may be interested to know about a new book coming out soon from Oxford University Press that I co-edited with Jennifer A. Baker entitled Economics and the Virtues: Building a New Moral Foundation. From the blurb:

While ethics has been an integral part of economics since the days of Adam Smith (if not Aristotle), many modern economists dismiss ethical concerns in favor of increasing formal mathematical and computational methods. But recent financial crises in the real world have reignited discussions of the importance of ethics to economics, including growing calls for a new approach to incorporating moral philosophy in economic theory, practice, and policy. Ironically, it is the ethics of virtue advocated by Aristotle and Adam Smith that may lead to the most promising way to developing an economics that emphasizes the virtues, character, and judgment of the agents it models.

In Economics and the Virtues, editors Jennifer A. Baker and Mark D. White have brought together fifteen leading scholars in economics and philosophy to offer fresh perspectives on integrating virtue into economics. The first section covers five major thinkers and schools in the virtue tradition, tracing historical connections and suggesting new areas of cooperation. The second section applies the ethics of virtue to modern economic theory, delving into its current practices and methodology to suggest areas for integration with moral philosophy. Finally, the third section addresses specific topics such as markets, profits, and justice in the context of virtue and vice, offering valuable applications of virtue to economics.

With insights that are novel as well as rooted in time-tested ethical thought, Economics and the Virtues will be of interest to economists, philosophers, and other scholars in the social sciences and humanities, as well as professionals and policymakers in the fields of economics and finance, and makes an invaluable contribution to the ongoing discussion over the role of ethics in economics.

Many if not all of the contributors will be familiar names: besides me and Jennifer, they include Christian U. Becker, Tim O'Keefe, James Otteson, Michael Baurmann and Geoffrey Brennan, Eric Schliesser, Andrew Yuengert, Christine Swanton, David C. Rose, Seung (Ginny) Choi and Virgil Storr, and Jason Brennan. (You can see the complete table of contents at Amazon, OUP, or my personal blog.)

Personally, this book has been a dream of mine for a number of years, and working with Jennifer, Adam Swallow and (the late) Terry Vaughn at OUP, and all the contributors, made that dream a reality in every possible way.

Economics and the Virtues has already been reviewed by Adam Gurri at Sweet Talk, where he calls it "a valuable source of insight, especially for economists used to operating within only one framework." Will Wilkinson of the Niskanen Center and The Economist calls it "a fascinating volume" and "an indispensable collection for anyone interested in moral psychology, economic theory, or the morality of markets," and pre-eminent philosopher and Kant scholar Onora O'Neill calls it "a rich and rewarding collection" that "explores classical accounts of the virtues, and argues that they remain essential not only to character but to culture, including the culture of markets."

(You can also see Jennifer's and my post at OUPblog discussing "The Big Short" in relation to the theme of the book.)

The Shocking Case of Ethical Misconduct in Economics

UPDATE (8/17/14):  David Warsh retracted the harsh critique of Debreu that I quoted below.  Warsh now states that Debreu did not delay in sending a referee's report on McKenzie's paper. He did, however, not inform Arrow of the paper's proof.  For more, see economicprinciples.com.

David Warsh (“The Startling Story behind a Famous Footnote”) calls attention to an apparently shocking case of ethical misconduct uncovered by Till Düppe and Roy Weintraub.

In Finding Equilibrium: Arrow, Debreu, McKenzie and the Problem of Scientific Credit (2014), Düppe and Weintraub reveal that Gerard Debreu, while himself trying to write a paper on general equilibrium with Kenneth Arrow, had been the reviewer of a paper on that subject by Lionel McKenzie (photo).

Did Debreu steal a Nobel from McKenzie?  Warsh reports that:

Further details had emerged, including an astonishing fact:  the anonymous referee, who bottled up McKenzie’s submission to Econometrica for a critical time, while Arrow and Debreu tidied up their proof, was none other than Debreu himself; and Debreu hadn’t disclosed his conflict of interest to the editor, Robert Solow. Debreu’s conduct was thus revealed as having been dishonorable.

One cannot cite everything that one reads and omissions may seem obvious with hindsight that are not at all obvious at the time.

Still, this reminds us why journals need to lay out and follow strict guidelines for conflict of interest and to promote virtue ethics through exemplars and role models.

Posted at 08:51 AM in Academia, Character, Ethics, Posts by Jonathan B. Wight | Permalink | Comments (0)

The John Templeton Foundation has funded a number of conferences around the world to explore the issue of spiritual capital in a business setting. To set the stage:

“Spiritual capital is the fund of beliefs, examples, and commitments that are transmitted from generation to generation through a religious, moral or spiritual tradition, and which attach people to the transcendental source of human happiness.”  (Theodore Roosevelt Malloch, Yale conference on Practical Wisdom in Management, July 2013.)

The final conference was held at Yale University’s School of Divinity last week.  It was a wonderful experience to be a part of this endeavor to: 1) explain how successful businesses can operate on the basis of principles that are supported by spiritual traditions; and 2) to popularize the view that markets can do far more than provide profits to shareholders.

There were many CEOs at this conference (click on the link above to see a list) and virtually all of them were able to say from personal experience that the relentless pursuit of maximizing profits did not lead to human resource or environmental sustainability, and hence did not ultimately maximize shareholder wealth. A different approach is needed that focuses on virtues and commitments to transforming ideals.

Ted Malloch, who helped organize the conference along with Gilbert Lenssen, President of The Academy of Business in Society (ABIS), made an interesting comment:

"There are moral preconditions in a market economy: the sentiments of sympathy, benevolence and compassion, of approval; disapproval and indignation, which underpinned the social order and make it possible to engage in business in the first place. Human beings and the corporations they originate are not just profit-maximizers. They have moral scruples, personal commitments and the desire for happiness. These set limits to their plans for personal profit, and also stimulate them to pursue profit in ways that honor their higher values and generosity. Many companies, large and small, public and private, around the world and from each tradition exhibit fees, live and conduct business by these values thereby exhibiting their spiritual capital.

Ted has written a slew of books on this subject with co-authors:

The End of Ethics and A Way Back: How To Fix A Fundamentally Broken Global Financial System (2013)

Proponents of the spiritual capital view are now stepping up to the debate not with platitudes about CSR, but with data and many studies. This includes many studies in experimental economics.  This is an exciting time to be teaching ethics and doing business.  Business can be a calling, with meaning and purpose.

On Character (in The New York Times' The Stone)

In this morning's The Stone column in The New York Times, UNC visiting professor Iskra Fileva offers "Character and Its Discontents," in which she writes eloquently on the nature of character in response to the situationist critiques of Gilbert Harman and John Doris. Her article doesn't lend itself well to quotes--it really must be read in full to be appreciated--but two points stood out to me.

I also appreciated that she began the piece with a discussion of character in fiction, which is important for more pragmatic reasons. Nonetheless, creators have a responsibility to their audience to maintain behavioral consistency in their characters, who can have complex motivations up to a point. This makes them more fascinating, but beyond this point, the characters themselves become imperceptible, such as in absurdist literature and theater, as Fileva mentions, or in poorly written traditional fiction (a frequent complaint of fans of "serial fiction" such as myself).