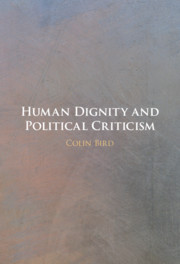 This was very quick buy (thank you Cambridge University Press author's discount): Human Dignity and Political Criticism by Colin Bird (University of Virginia) promises a fascinating critical look at both the nature of human dignity as well as its potential impact on political institutions. From the publisher's website:

Many, including Marx, Rawls, and the contemporary 'Black Lives Matter' movement, embrace the ambition to secure terms of co-existence in which the worth of people's lives becomes a lived reality rather than an empty boast. This book asks whether, as some believe, the philosophical idea of human dignity can help achieve that ambition. Offering a new fourfold typology of dignity concepts, Colin Bird argues that human dignity can perform this role only if certain traditional ways of conceiving it are abandoned. Accordingly, Bird rejects the idea that human dignity refers to the inherent worth or status of individuals, and instead reinterprets it as a social relation, constituted by affects of respect and the modes of mutual attention which they generate. What emerges is a new vision of human dignity as a vital political value, and an arresting vindication of its role as an agent of critical reflection on politics.

Although I'm concerned about Bird's rejection of the normal (Kantian) understanding of dignity, I am intrigued by his emphasis on the respect it implies.