Special issue of Journal of Bioeconomics: In Memorium of Elinor Ostrom 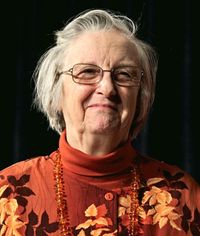 The latest issue of Journal of Bioeconomics (16/1, April 2014) is dedicated to the work of Nobel laureate Elinor Ostrom, and features her last paper as the target article, to which a multidisciplinary assortment of scholars respond. The articles and abstracts (when provided) follow.

In this paper I will provide an overview of our findings from studying irrigation systems in the field so that readers who are not familiar with our prior research gain at least an initial sense of these findings. I will provide a second short overview —this time of the institutional analysis and development (IAD) framework offering a general method for doing institutional analysis. I will then introduce the possibility of looking at the change of rules as an evolutionary process. The method for studying the evolution of rules will be based on the IAD framework and on our long-term study of rules related to irrigation systems. In the conclusion, I return to the question as to why it is important to authorize resource users’ relative autonomy in the development of their own rules and to learn from the resulting institutional diversity.

The target article was written for a workshop that I organized with Lin Ostrom titled “Rules as Genotypes in Cultural Evolution”. In my commentary, I describe the background for the workshop and target article in addition to commenting on the article itself. A compelling case can be made for functionally organized human groups as like species that adapt to their local environments. A cultural inheritance mechanism is required for this to happen, which functions analogously to genetic inheritance, although the mechanistic details need not be analogous. Indeed, a diversity of cultural inheritance mechanisms are possible that need not be mechanistically analogous to each other. In addition, most modern human populations consist of a diversity of functionally organized groups, or cultural ecosystems. The distinction between “species” and “ecosystem” is important because the concept of an inheritance system applies primarily to the former. Finally, positive cultural evolution in modern large-scale society must be engineered and an explicitly evolutionary perspective will add value to the enterprise.

Now, when longitudinal data are available or soon will be, it is important to carefully consider research strategies for the second phase of the Ostrom Project. I recommend a problem oriented approach aimed at answering questions and solving puzzles that have emerged in the last 25–30 years and a focus on the political dimensions of the commons. Reading Lin’s paper in this issue, I found her proposal valuable but too narrow. I suggest that the longitudinal phase of the Project should deal explicitly with institutions and mechanisms for solving conflicts among local participants over how to divide the costs and benefits of using common resources. I offer, as an illustration, a number of research questions that emphasize institutions in the policy and constitutional spheres rather than in the operational one.

The work of Elinor Ostrom is important for those who deplore the fact that the rise of ethnographic methods has led mainstream socio-cultural anthropologists to lose interest in evolution. This trend in anthropology is illustrated with reference to research on property, where Ostrom herself made notable contributions. However, it is argued that her mature work on the evolution of rules and her privileging of low-level institutions do not pay sufficient attention to local cultural notions and reflect the bias of a powerful Western ideology.

Claude Ménard, "The diversity of institutional rules as engine of change"

The target paper by Elinor Ostrom in this Special Issue carries a clear message about her research agenda: be attentive to institutional diversity, be aware of the danger of ‘monoculture’ and ‘monocropping’ of rules. Although Ostrom was fully aware of the necessity to focus on relevant and simplified variables in order to build general explanations, she deliberately adopted a bottom-up research strategy that opposes the top-down approach dominating social sciences. Her framework, developed through extensive field studies, shows the central role of “clusters” of rules in defining institutions and understanding how they change. My discussion is organized around this privilege conferred to rules. Section 2 posits her contribution, particularly her IAD model, in relation to New Institutional Economics. Section 3 focuses on what I consider her main contribution: her analysis of rules as the strategic point through which changes happen. Section 4 discusses some methodological issues, and Sect. 5 concludes.

Amy R. Poteete, "How far does evolution take us? Comment on Elinor Ostrom’s: do institutions for collective action evolve?"