U.S. Unemployment is Cyclical After All

Krugman points to this paper by Edward Lazear and James Spletzer given to the Jackson Hole Central Bank meeting last week.

The paper addresses whether this is a Keynesian recession driven by lack of demand OR is it a supply-side recession caused by structural mismatch of workers and jobs? The paper concludes:

An analysis of labor market data suggests that there are no structural changes that can explain movements in unemployment rates over recent years. Neither industrial nor demographic shifts nor a mismatch of skills with job vacancies is behind the increased rates of unemployment. Although mismatch increased during the recession, it retreated at the same rate.

The bottom line is: we are not likely in danger of igniting inflation by further stimulation: there is plenty of qualified labor, capital, and other resources to accommodate a faster expansion.

The moral implications are pretty stark: Young people are disproportionately bearing the pain of this recession (see graph). The longer they stay out of the labor force the more likely that their skills (and moral resolve) will degrade with a permanent effect on their careers.

Do we permanently scar the lives of current graduates and other young people by allowing unemployment to remain high? Or, do we bite the bullet, as the generation did after WWII (with very high debt ratios), and invest in people and infrastructure while interest rates are at all-time lows? [Yes, there is an argument to eliminate or reduce the minimum wage which effects entry-level workers; I don't find that idea convincing for reasons I don't have time to expand on here—but your comments most welcome.] 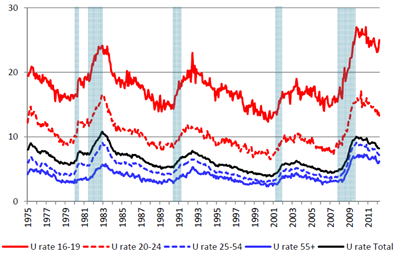 If you want to hear a complaint against millionaires not paying their fair share of taxes, here is Ronald Reagan making the rounds on YouTube (juxtaposed with Obama): 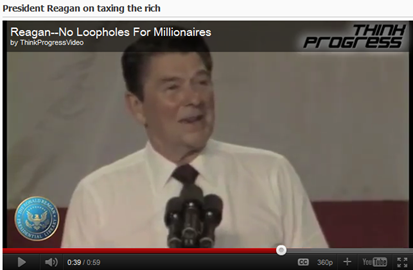 But one has to ask: why would Republicans eagerly support a Reagan policy to close tax loopholes but howl at Obama's suggestion to do the same?

One reason could be that Reagan always smiled—he made people feel warm about themselves. He was immensely likable, even if you didn't agree with his policies. Tip O'Neil (speaker of House) and Ronnie could get along. Today's leaders on both sides seem distant and aloof and not easily able to ask Americans to share the burden of deficit reduction—and certainly not with a smile.