I was very excited today to receive the new book from Julia Annas (and Oxford University Press), Intelligent Virtue, in the mail:

Intelligent Virtue presents a distinctive new account of virtue and happiness as central ethical ideas. Annas argues that exercising a virtue involves practical reasoning of a kind which can illuminatingly be compared to the kind of reasoning we find in someone exercising a practical skill. Rather than asking at the start how virtues relate to rules, principles, maximizing, or a final end, we should look at the way in which the acquisition and exercise of virtue can be seen to be in many ways like the acquisition and exercise of more mundane activities, such as farming, building or playing the piano. This helps us to see virtue as part of an agent's happiness or flourishing, and as constituting (wholly, or in part) that happiness. We are offered a better understanding of the relation between virtue as an ideal and virtue in everyday life, and the relation between being virtuous and doing the right thing.

In the latest issue of Erasmus Journal for Philosophy and Economics (4/1, Spring 2011), there is an interview with Daniel Hausman, in which he discusses his views on methodology (with a particular focus on Mill) and his upcoming book on preferences (of which his recent paper "Mistakes about Preferences in the Social Sciences" is apparently a preview). He also describes the path he took to studying the philosophy of economics and his early background--very interesting. (I also strongly recommend another recent paper of Dan's, "Hedonism and Welfare Economics," in which he critiques the use happiness as a measure of well-being.)

Also in the journal you'll find an exchange on critical realism between Simon Deichsel, Uskali Mäki, and Tony Lawson; Irene van Staveren's review of Economic Pluralism, edited by Robert Garnett (a contributor to Accepting the Invisible Hand), Erik Olsen, and (guest blogger) Martha Starr; and a review of Debra Satz’s Why Some Things Should Not Be for Sale: The Moral Limits of Markets

by Joseph Heath (a contributor to The Thief of Time).

Much Ado about Happiness

Carl Bialik at The Wall Street Journal has an article in today's edition and a blog post from last night, both very evenhanded, about the attempts by governments to measure the happiness of its citizenry, and the skepticism of some regarding the efficacy of this.

For a critical look at the theory behind happiness studies, I would recommend Dan Hausman's article "Hedonism and Welfare Economics" from Economics and Philosophy, 26(3), November 2010.

I have two significant problems with governments purporting to measure happiness (which are similar to my problems with libertarian paternalism), which I hope to explore at length elsewhere.

1) Happiness is too vague a notion, and multifaceted a concept, to be measured with any degree of accuracy, and any instrument that is developed to do so will inevitably reflect the policy preferences of the parties doing the measuring.

2) It is grossly inappropriate for governments to base any policy decisions on what it thinks makes its people "happy" (or wealthy or wise), when what they should do is enable (and respect) the widest range of choices the people can make in their own interests (to whatever extent these interests include happiness). It is not up to the government to decide that we should be "happy" (especially according to some artificial and contrived definition), nor to take measures to get us there.

(See also this older post of mine at Psychology Today, making a similar point about happiness, but in the context of personal happiness and positive psychology rather than political theory.)

Should Science Determine Our Values?

David Hume be damned, the answer is "yes" according to Sam Harris, in The Moral Landscape: How Science Can Determine Human Values (Free Press, 2010). Harris argues that all values reduce to "facts" that science can provide.

Harris is a utilitarian, seeking to reduce "needless human suffering." In his view, science allows "us"—that is, well-educated liberal Westerners--to decide on the meaning of "moral progress." It should be clear, he argues, what human flourishing means and that we can adopt a definition and measurement using scientific methods. In short, there is an absolute moral standard of right and wrong, as illuminated by the "science" of human well-being.

Aside from Harris' arrogance, there is a huge dose of condescension. There is no fair conception here of what the human experience means in non-Western cultures. To Harris, the measure of human progress appears to be externally-driven by caloric intake and clothes (he rails against the "sacks" that Islamic women wear). I haven't read the book, but I am curious if Harris is aware of Nozick's Experience Machine that could make and keep us perfectly pleasured. Is that an ideal life? It would seem so to Harris.

If you don't want to buy the book, you can get the essence of his message in this TED talk.

The latest issue of Philosophy and Phenomenological Research (January 2011) contains many interesting papers, three of which I highlight below the fold. (This journal does not contain abstracts, so I've extracted them from the introductions to the papers.) 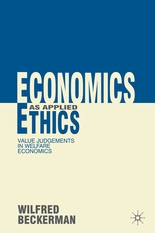 , a detailed account of the intrinsically ethical nature of welfare economics, discussing the nature of preferences, utilitarianism, equality, happiness, and other important topics in the philosophy of normative economic analysis. Furthermore, it is written in a style appropriate for upper-level undergraduate and graduate students as well as professional economists; in this way, it may have wider appeal and impact than even Hausman and McPherson's essential survey Economic Analysis, Moral Philosophy and Public Policy

and Little's classic A Critique of Welfare Economics.

And the endorsements are superlative (with one glaring exception, of course):

"This book is witty and wise, and a delight to read. It will enlighten economists – both students and teachers – and will encourage non-economists skeptical of the subject's ability to contribute to human welfare to think again." Wendy Carlin, Professor of Economics, University College London

"As more people are starting to realize, economics without ethics is dangerous, and ethics without economics is foolish. This very timely book explains why these two perspectives can and must be combined." Mark D. White, Professor in Political Science, Economics, and Philosophy, College of Staten Island/CUNY & author of Kantian Ethics and Economics: Autonomy, Dignity, and Character

"Wifred Beckerman's Economics as Applied Ethics: Value Judgements in Welfare Economics elucidates many of the important ethical questions that are almost always suppressed in both mainstream economics teaching texts and advanced scholarship. The book provides a productive blending of abstract theoretical discussion with applications that focus on contemporary policy debates. It should therefore appeal both to students who are excited by and seek deeper understanding of abstract ideas, and those who are impatient with abstract debate and want to see just how these ideas matter concretely in policy making." George DeMartino, Professor and Co-director of the MA program in Global Finance, Trade and Economic Integration, University of Denver

Now we come to the "miscellaneous" or "grab bag" section of my highlights from the preliminary program for the upcoming Allied Social Science Association meetings in Denver in early January. This should not be taken to imply that any of these sessions are frivolous (though one is, and delightfully so), but rather than each is unique, and therefore did not fit into any of the previous posts (economics and ethics, economics and religion, rationality and choice, and the status of economics and economics education). (The sessions appear below the fold, and as before, I've omitted the names of chairs and discussants, which can found on the program.)

Speaking of Luigino Bruni, he just sent me the following call for papers (longer call with submission details and deadlines here), featuring our own Irene van Staveren as a keynote speaker:

Do economic interactions crowd out civic virtues and human capabilities?

Econometica and the HEIRs Association, in collaboration with the Economics Department of Milano-Bicocca and Irec (International Review of Economics), are organizing, on June 8-9 2011, an International Conference on "Market and Happiness. Do economic interactions crowd out civic virtues and human capabilities?" with the aim of eliciting contributions on the nexus between wellbeing, economic interactions, civil virtues and human capabilities.

Bruni on The Happiness of Sociality: Economics and Eudaimonia

This looks fascinating (though I have't managed to acquire a copy yet), from the latest issue of Rationality and Society (22/4, November 2010):

"The Happiness of Socialty. Economics and Eudaimonia: A Necessary Encounter"

The paper discusses some issues of the debate on happiness in economics. In particular it deals with the relationship between happiness and sociality. In fact, in contemporary ‘economics and happiness’ literature there is a new interest in interpersonal relationships thanks to the huge empirical evidence that genuine sociality is one of the heaviest components of self-reported happiness. At the same time, mainstream economics is badly equipped for studying genuine sociality, because it treats interpersonal interactions as elements to be taken into account in terms of externalities. The intuition originating the paper is the conviction that if research on happiness aims at taking into account non-instrumental interpersonal relations, i.e. ‘relational goods’, scholars will profit by a reconsideration or retrieving of the Aristotelian tradition of happiness as eudaimonia.