Lisa Herzog on "The Epistemic Seduction of Markets" (in The Raven) 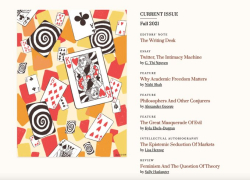 In the inaugural issue of The Raven, a literary philosophy magazine*, Lisa Herzog (University of Groningen) combines academic expertise and personal history to scrutinize knowledge-based arguments for the market in "The Epistemic Seduction of Markets." From the end of her introduction:

I have concluded that the epistemic argument for markets needs to be heavily qualified, if not put on its head: it is not an argument for “free” markets but for the careful regulation of markets. The “invisible hand” can only, if ever, do its work on material that has been diligently prepared, and continues to be monitored, by many visible hands. Otherwise, the result may be a mere chimera of the epistemic mechanism that I learned about when studying economics: it may seem to work fine on the surface but fail to realize the goals it is supposed to achieve, such as genuine preference satisfaction and the avoidance of inefficient economic behavior. This misleading image of the market can keep us trapped when we think about institutional design, inserting a pro-market bias instead of allowing for an objective evaluation of alternatives. And given the need to redesign many economic institutions in the face of climate change and massive socio-economic inequality, we cannot afford to be held captive by a picture, as Wittgenstein had once put it.

An intriguing read, and just one part of an encouraging start for a unique new publication.

The Raven is a magazine of original philosophy written for intellectually curious readers with or without academic training in the discipline. It aims to revive an essayistic style of philosophy that was more common in academic venues as recently as thirty years ago but has gradually disappeared — that is, to publish contributions to the “literature” that deserve to be called literature.

In today's Wall Street Journal, Mario Vargas Llosa, the winner of the 2010 Nobel Prize for Literature, writes very eloquently (of course!) on the connections between liberty, dignity, and human flourishing. He describes how these ideas, as those of any writer, are an essential and crucial part of his work:

It is the function of the novelist to tell timeless and universal truths through the device of a fashioned narrative. A story's significance as a piece of art cannot be divorced from its message, any more than a society's prospects for freedom and prosperity can be divorced from its underlying principles. The writer and the man are one and the same, as are the culture and its common beliefs. In my writing and in my life I have pursued a vision not only to inspire my readers but also to share my dream of what we can aspire to build here in our world.

More substantively, he describes the different understandings of the word liberal around the world, as well as how the term, along with the associated belief in the efficacy of the free market, have been abused or obscured in various ways:

There are those who in the name of the free market have supported Latin American dictatorships whose iron hand of repression was said to be necessary to allow business to function, betraying the very principles of human rights that free economies rest upon. Then there are those who have coldly reduced all questions of humanity to a matter of economics and see the market as a panacea. In doing so they ignore the role of ideas and culture, the true foundation of civilization. Without customs and shared beliefs to breathe life into democracy and the market, we are reduced to the Darwinian struggle of atomistic and selfish actors that many on the left rightfully see as inhuman.

The market does not operate in an ethical, political, or cultural vacuum, which responsible proponents of it recognize (but for which few get credit).

I'll allow Mr. Llosa the final word (would that I could do that more often!):

The search for liberty is simply part of the greater search for a world where respect for the rule of law and human rights is universal—a world free of dictators, terrorists, warmongers and fanatics, where men and women of all nationalities, races, traditions and creeds can coexist in the culture of freedom, where borders give way to bridges that people cross to reach their goals limited only by free will and respect for one another's rights. It is a search to which I've dedicated my writing, and so many have taken notice. But is it not a search to which we should all devote our very lives? The answer is clear when we see what is at stake.

Peter Boettke offers sage “Advice to Undergraduates”  who are thinking of graduate school.

To succeed in economics, Peter says to follow four rules:

3.      Embrace Mises [okay, if you’re not Austrian you can substitute read Mises].

4.      Continuously fall in love with the discipline of economics.

People get into trouble trying to be who they’re not, by gravitating toward what one thinks others want to hear.  Peter notes that, “the stealth strategy talk is the most destructive idea I have seen for promising academic careers in my 25 years of teaching.”

A key point in this essay is to be honest with yourself and others: in other words, strive to know yourself and be true to yourself – not a bad way to close any virtue ethics blog.

(which is now available), we come to Chapter 6 by Robert F. Garnett Jr., entitled "Philanthropy and the Invisible Hand: Hayek, Boulding, and Beyond." (If you missed them, here are links to the previews of the chapters by White, Meadowcroft, Gwartney and Connors, Baker, and Blevins, Ramirez and Wight, as well as the book's preface.)

Garnett's chapter discusses the dismissive approach that economics has taken to philanthropic giving, which he links to the "Adam Smith Problem":

The pervasive neglect of philanthropy in economic theories of commercial society is the mark of an enduring “Adam Smith Problem” (ASP), both in the classical sense described by Oncken and the modernist version of the ASP that took root after World War II. Professional economists in the 1940s, 1950s, and 1960s, inspired by the rise of national income accounting and general equilibrium theory, embraced a modernist image of the market economy (or the mixed economy of markets and government) as a machine-like system. ... Economists came to regard markets and commerce as the generative core of economic life (potent, efficient, systemic), in contradistinction to charity and other forms of philanthropic giving, which were seen as outmoded, inefficient, and ad hoc. (pp. 111-2)

Garnett brings two of the most important economists of the 20th century to bear on addressing this problem:

To better understand the contours and significance of the aforementioned Adam Smith Problem, this chapter examines its treatment by two pioneering economists of the post–World War II period: F.A. Hayek and Kenneth Boulding. Notwithstanding their philosophical differences, I find that Hayek and Boulding share a similarly dualistic view of the commerce/philanthropy relationship. In other words, both partake of the modern ASP. At the same time, their respective approaches offer valuable tools and suggestions that can assist us in seeking to extend the reach of Smith’s invisible hand to include philanthropic motives, actions, affiliations, and processes. The final section outlines a strategy for mobilizing the resources of Boulding, Hayek, and other post-Walrasian economists to reintegrate philanthropy into the economic conversation of commercial society. (p. 113)

Among Garnett's many insights is this one (which in particular speaks to me; emphasis mine):

To overcome the dysfunctional separation of philanthropy from the invisible hand, we must recognize that their fraught relationship stems from a lingering Adam Smith Problem and continue to actively rethink the monist notions of self and economy that gave rise to this ASP in the first place. Stated positively, we must develop cogent, pluralistic conceptions of economic life, particularly the plurality of human motivations and institutional processes that characterize every real-world economy. (pp. 125-6)

To lead up to the release of Accepting the Invisible Hand: Market-Based Approaches to Social-Economic Problems early next month, I will be posting features on each of the chapters, starting with the complete preface today (with hyperlinks) - as always, comments are most welcome.

While searching for readings for my legal philosophy class (now focusing on constitutional interpretation in light of the pending Supreme Court nomination and confirmation process), I lit upon this fantastic symposium on Justice Ruth Bader Ginsburg in the Ohio State Law Journal, in particular the article by Tobias Barrington Wolff entitled "Ruth Bader Ginsburg and Sensible Pragmatism in Federal Jurisdictional Policy," in which Wolff writes (emphasis mine):

Justice Ginsburg combines this concern over the inherent limitations of statutory language with a particular strain of interpretive conservatism. Her dissent in Surgeons, and her work in the area of procedure more broadly, exhibits a healthy respect for the wisdom of past practice as it develops over time. For Justice Ginsburg, the starting point in applying open-ended congressional language to a question of procedure or jurisdiction is an appreciation for the stable and sensible solutions that lawyers and judges have crafted in responding to analogous problems in past disputes. In this area of law, at least, her approach might be described as Hayekian in its respect for the value of the organic development of complex practices. (p. 858)