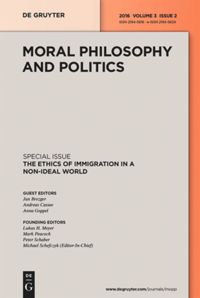 Forthcoming (and open access) from the journal Moral Philosophy and Politics, "Egalitarian Trade Justice" by James Christensen (University of Essex) surveys several approaches to incorporating explicit conceptions of fairness, justice, and equality into the debates over trade (often dominated, in economics, by efficiency concerns). Judging from the other "online first" papers recently posted, an upcoming issue of the journal will focus on such expansive ethical issues involved with trade, always a welcome discussion.

The first few paragraphs preview the contents of the paper:

In recent decades, notions of fair and just trade have become increasingly widespread. These ideas are invoked by politicians, protesters, workers, consumers, and corporations. The belief that trade is currently unfair or unjust is ubiquitous, though there is considerable disagreement about where, exactly, the unfairness or injustice lies, and, relatedly, about what must be done to rectify the situation. Resolving these disagreements will be crucial if we are to succeed in reconciling ourselves to the globalized world in which we live, and in resisting calls for a return to more parochial modes of production and exchange.

Among political philosophers, it is common to claim that justice in trade requires some kind of equality (Brandi 2014; Christensen 2017; Garcia 2003; James 2012; Moellendorf 2005; Suttle 2017). Often, the claim is that the national income gains that trade makes possible should, at the bar of justice, be distributed in an egalitarian fashion. Trade egalitarianism has been defended in a variety of different ways, but, for present purposes, it will be helpful to distinguish between two broad approaches. The first approach begins with a general commitment to equality and then identifies the implications of that value for trade. Advocates of this approach argue that trade must be arranged in a manner that adequately promotes a value that we have trade-independent reason to endorse (Christensen 2017, pp. 140–142). Because this approach begins from a commitment to equality as a freestanding value, and then applies that value to trade, we can refer to it as the applicative approach.

The second approach, by contrast, does not begin with a general commitment to equality. Rather, it begins with the practice of trade, and with an account that identifies that practice’s nature, aims, and key participants. In light of the account that they provide, advocates of this approach then argue that an egalitarian principle is appropriate for trade practice – regardless of that principle’s appeal, or lack thereof, in other contexts (James 2012). Because this approach begins with an explication of the nature of trade practice – and searches for a principle suited to that nature – we can refer to it as the explicative approach.