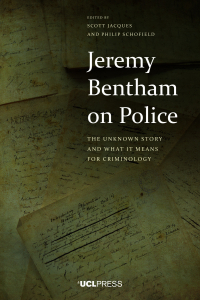 UCL Press has released a new book, Jeremy Bentham on Police, edited by Scott Jacques and Philip Schofield, which is available as a free download. Its chapters are written mostly from the viewpoint of criminology, but they would seem very relevant to the law-and-economics approach to policing as well, given Bentham's foundational influence over the field.

Jeremy Bentham’s ideas on punishment are famous. Every criminology student learns about Bentham, and every criminologist contends with him, as advocate or opponent. This discourse concerns his ideas about punishment, namely with respect to legislation and the panopticon. Yet, scholars and students are generally ignorant of Bentham’s ideas on police. Hitherto, these ideas have been largely unknowable. Now, thanks to UCL’s Bentham Project, these ideas are public.

Jeremy Bentham on Police celebrates this achievement by exploring the story of Bentham’s writings on police and considering their relevance to the past, present and future of criminology. After Scott Jacques introduces the book, the Director of the Bentham Project, Philip Schofield, describes and explains how it works. Then Michael Quinn, who brought together Bentham’s writings on police, delves into the personal and socio-historical background in which they were created. An extract follows, representing the most (criminologically-)relevant passages from Bentham’s police writings. Finally, a rich variety of scholars offer their thoughts on what those writings mean for criminology. These contributions come from Anthony A. Braga, Ronald Clarke, David J. Cox, Stephen Douglas, Stephen Engelmann, G. Geltner, Joel F. Harrington, Jonathan Jacobs, Paul Knepper, Gloria Laycock, Gary T. Marx, Daniel S. Nagin, Graeme R. Newman, Pat O’Malley, Eric L. Piza, Kim Rossmo, Lucia Summers and Dean Wilson.