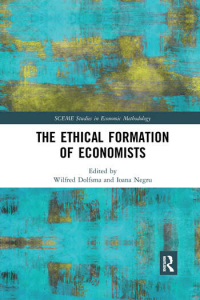 Comes the next economic crisis, comes the next call for economics to become both more realistic and to be more ethical. While the two are related, in The Ethical Formation of Economists (Dolfsma and Negru 2019) we focus on the vexing issue of the way in which ethics and economics relate: Why is the call not answered?

Many, especially heterodox economists, blame economic theory: It does not have conceptual space for ethics. This is a call for ethics in economics (Figure 1). That, in some way, is correct, but in a strict sense it is not: Only one form of ethics is consistent with (mainstream) economics, and that is utilitarianism. The call for economics to make conceptual space for ethics is a call for (one of) the other two broad perspectives in ethics to be given a place: deontology and communitarian ethics. Most of discussions on ethics and its consequences in mainstream economics are situated within the area of welfare economics, despite the ethical implications of most economic theories endorsed by various groups of economists. There is indeed a need for more of an ethics of economics (Figure 1).

Indeed, there is a small group of economists that looks at the ethical stance that economists take: distinctly utilitarian and dismissive of people’s deontological rights or the ethical norms that emerge and develop in a community. Does economic theory as taught at colleges make economists selfish (i.e., considering utilitarian arguments only), or are selfish individuals drawn into economics? Or both? (Cf. Frank et al 1993.) 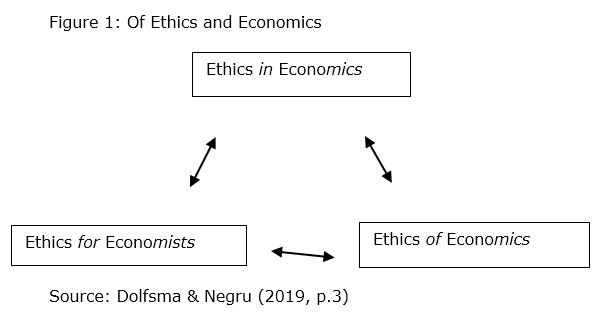 What this discussion does not touch upon is what is the key contribution of this volume of contributions: How are economists actually formed, ethically? How does an ethics of economists take shape? This obviously happens in class, but also later in their careers, for instance when doing research or when informing the larger audience about findings (through media, with their own specific working [cf. McCarthy and Dolfsma 2014]).

A related question is whether economists can be trained ethically or if learning ethics can take place naturally and in an evolutionary and behavioural way, influenced by the life and career pathways economists have? This is an essential question: In our book, DeMartino (2019) argues that the postgraduate curriculum must contain modules on ethics in economics, and McCloskey (2019) states that the ethical behaviour starts early on, in the education of children and young people, that can then evolve later in their careers.

For us, the essential issue is whether economists can be trained, at all levels (undergraduate, postgraduate and doctoral), in scientific ethical principles through various modules, such as courses on ethics in economics and economic policy-making, and also scientific ethics taught in courses in research methods. This will raise the awareness of thinking ethically when suggesting economic policies and the appropriate responsibility that comes with policy advice. Re-introducing courses of ethics in economics would be a progressive step towards training and forming ethical economists.

Dolfsma, W., and I. Negru, eds. (2019) The Ethical Formation of Economists. London and New York: Routledge.

Yacintas, A. (2020) "Why Is Economics Not Part of a System of Scientific Ethics? A Review Essay on Wilfred Dolfsma and Ioana Negru’s The Ethical Formation of Economists." The Journal of Philosophical Economics: Reflections on Economic and Social Issues XIII(2): 202-214.

The re-establishment of ethics in economics—and more precisely in economic theory—is now more than eminent. It is promoted and supported by numerous philosophically intrigued economists. The claim has shifted from Wertfreiheit to teaching economics’ students the importance of moral philosophy in the development of economic theory, and how virtues and moral values do not limit the objective perception of economists by dragging them down a road of vague cogitation, but offer a more concrete understanding of human action. “What to do, then, for economics? Answer: raise ethical men and women, some of whom become economists. We are not doing so now in the education of economists.”* Yet this procedure, even though presented and understood as a leap forward and an escape from the strict mathematical and narrow-minded neoclassical economics method, could still be inadequate and one-dimensional. The question is what kind of ethics are students being taught?

Students are not in need of introductory lectures that praise the importance of ethics in economics and present ethics only form the utilitarian point of view. Students can easily apprehend the utilitarian logic behind works of great classical and neoclassical economists without being taught the importance of utilitarian ethics. Economics’ students should be given the opportunity to connect economics with a variety of ethical theories. That could lead to a generation of open-minded and ethically-integrated economists and humans in general. By pretending to reexamine economics through ethics, yet being interested only in the utilitarian perspective of ethical values, the course is definite and parallel if not the same as the one economics have followed so far.

Yannis Papadopoulos was born in Athens in 1993 and studied European and International Relations at Panteion University in Athens. He received his Master’s degree in Political Economy from King’s College London. At the moment, he is in the final year of his doctoral thesis entitled “The Ethics of Efficiency and the Efficiency of Ethics” at Panteion University, for which he has received a scholarship from the Hellenic Foundation for Research and Innovation (H.F.R.I).