Andreou on "Commitment and Resoluteness in Rational Choice" (Cambridge Elements) 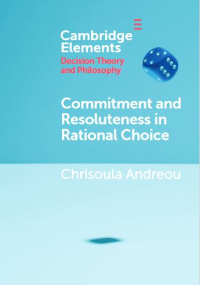 Available for free download until February 18, 2022, is a new Cambridge Element from Chrisoula Andreou (University of Utah) titled Commitment and Resoluteness in Rational Choice. From her introduction:

Commitment is quite commonplace and, seemingly, quite significant, since it treats certain options as “off the table.” My commitment to teaching my class this morning requires me to close off or put aside the possibility of doing some weight training instead. And my commitment to certain healthy eating practices requires me to close off or put aside the possibility of bringing a box of Twinkies as my lunch. Still, it might seem like commitment is either redundant or irrational – redundant if the option committed to is (taking into account its consequences) preferred over the alternatives, and irrational if the option committed to is dispreferred. But, as will become apparent, there are scenarios in which the ability to commit to a dispreferred alternative is necessary to reap the benefits of cooperation or self-control. This Element focuses on the interaction between cooperation, commitment, and control. Drawing from and building on the existing literature, including my own prior work in this space, I guide the reader through the interesting, challenging, and evolving philosophical terrain where issues regarding cooperation, commitment, and control intersect, adding some new contributions along the way.

Chrisoula Andreou was also my co-editor on The Thief of Time: Philosophical Essays on Procrastination, and her chapter from that book is just one of her many important contributions to this area.

The Thief of Time reviewed at Notre Dame Philosophical Reviews

This week, Notre Dame Philosophical Reviews published a review by Nomy Arpaly (Brown University) of The Thief of Time: Philosophical Essays on Procrastination:

This book addresses the dearth of philosophical treatments of procrastination. It consists of fifteen articles, some by philosophers and some by psychologists, economists, and others. There are three parts to the book: one concerned with analyzing procrastination and finding out its sources, one that explores the connection between procrastination and imprudence and vice, and one which deals with ways in which procrastination can be overcome. Since the book's subtitle is "Philosophical Essays on Procrastination," a warning might be in order: strictly speaking, some of the essays are not philosophical, and some appear to sit on the borderline between moral psychology and just plain psychology or economics. Some articles even dabble in (scientifically savvy) self-help.

After going through the book part by part and chapter by chapter (and spending a long paragraph offering valuable praise and criticism of my chapter), she concludes:

All in all, this collection is good reading for anyone who would like to do philosophy on the subject of procrastination or who seeks to procrastinate her work by reading interesting things.

All in all, a thorough, fair, and overall positive review!

UPDATED: Procrastination featured on "To the Best of Our Knowledge"

[UPDATED with the link to the actual podcast]

Two contributors to The Thief of Time: Philosophical Essays on Procrastination

, Jennifer A. Baker and (co-editor) Chrisoula Andreou, will be featured on the national Peabody Award-winning radio show “To the Best of Our Knowledge” on January 23, 2011. Air times for the Public Radio International/Wisconsin Public Radio show vary by station, but a podcast is available here. Baker, in particular, will discuss whether procrastination is a vice in the virtue-theoretical sense of the term, as she does in her Thief of Time chapter. (See here for more details on the show.)

I'll be appearing on CBC's The Current program Tuesday morning, December 28, discussing procrastination alongside Piers Steel, prominent procrastination researcher and author of The Procrastination Equation: How to Stop Putting Things Off and Start Getting Stuff Done

. I'll post a link to the online version/podcast as soon as I get it.

Pychyl on procrastination and future selves

, Tim Pychyl most recently examined Christine Tappolet's chapter "Procrastination and Personal Identity." In her chapter, Tappolet argues that, if procrastination is interpreted as burdening one's "future self" with the foregone tasks of today, it reveals a lack of concern for future selves that plays into debates over psychological continuity account of personal identity.

Pychyl is more concerned with the claim that procrastination always burdens future selves (which, as he acknowledges, Tappolet herself qualifies). He augments her account, offering alternative interpretations of procrastination, such as this one:

I agree that it is tempting to conclude this if we frame it as an overriding concern for present self, but what if it is that one lacks the courage or the will to act in a way that would be best for future self. Most broadly, yes, future self is still losing to present self, but it's not so clear that it's lack of concern. It's not so clear that it's a kind of assault on the future self, the deliberate imposition of a burden on future self due to a lack of concern. It is possible that concern isn't what is lacking, but courage or will.

So, on the one hand, our procrastination may reflect a moral failing of present self in relation to future self (a lack of courage), and on the other hand it may reflect an optimistic (and perhaps a naïve) hope that future self will have attributes that present self lacks (e.g., energy). In neither case do we have to assume a lack of special concern for future self.

For example, if I put off grading exams tonight because I'm too tired, and I expect my tomorrow-self to have more energy and focus, and therefore to do a better job, then I am merely taking advantage of the differential resources of my different time-selves by putting off grading until tomorrow. But then again, if this motivation is sincere, it might not count as procrastination, since it is neither against my better judgment nor would I regret it later (unless my tomorrow-self turned out to be in worse shape than my tonight-self!). In such a case, my better judgment recommends that I put off grading--unless that is a mere rationalization, in which case it would more likely count as procrastination, but also as an abuse of future selves rather than strategic, purposeful time-shifting. [UPDATE: Tim incorporated this into his original post as a comment.]

Posted at 10:50 AM in Books, Other blogs, Posts by Mark D. White, Procrastination, Psychology | Permalink | Comments (0)

Timothy Pychyl, one of the most prominent researchers, writers, and educators on procrastination, features my chapter from The Thief of Time

, "Resisting Procrastination: Kantian Autonomy and the Role of the Will," in his latest post on his Don't Delay blog at Psychology Today:

If I lock the refrigerator to block my late-night snacking, I might have made a useful predecision to protect myself against my seemingly uncontrollable urges, but there's another route. I could try harder and exert my will. The "will" is an old notion, often forgotten and even denied, but it has resurfaced in an important way in recent writing about how we can resist procrastination.

Fellow blogger, Mark White, is also the co-editor of one of my favorite books about procrastination, The thief of time: Philosophical essays on procrastination (2010, Oxford University Press). Mark's own contribution to this collection of essays is, I think, the most important in the volume. Why? Because he provides an articulate and balanced critique of the behavioral-economic model of procrastination.

He also highlighted my co-editor Chrisoula Andreou's Thief of Time chapter, "Coping with Procrastination," in his last previous post, and decicated podcast to her chapter and mine this past summer. Thanks, Tim!

(And make sure to check out Tim's new book, The Procrastinator's Digest!)

Continuing through the preliminary program for the upcoming Allied Social Science Association meetings in Denver in early January, I present below the fold several sessions that touch on rationality, preferences, self-control, and choice (as before, I've omitted the names of chairs and discussants, which can found on the program):

At Prawfsblawg, Sergio Campos (University of Miami School of Law) picks up on a theme explored in The Thief of Time: Philosophical Essays on Procrastination

(as discussed in the New Yorker review) about divided selves and applies it to mandatory class action suits. From the post:

[M]ass torts are rife with internal conflicts.  For example, in asbestos litigation, the "presents" want to recovery as quickly and as much as possible, but the "futures" want to make sure that there are funds available for them should they manifest injury.  But how does the mandatory class action resolve this conflict?  In fact, by forcing individual plaintiffs to litigate collectively when they would be better off going alone, isn't the mandatory class action only making things worse, by, in effect, forcing the "high" value claims to subsidize the "low" value claims?   As I argue in my draft "Mass Torts and Due Process," focusing on conflicts among class members obscures a more fundamental conflict.  Like procrastination, mass torts primarily involve an intertemporal conflict within each class member.

Read the rest at Prawfsblawg...

Interview on The Takeaway about The Thief of Time

This morning, my co-editor Chrisoula Andreou were interviewed on The Takeaway with John Hockenberry and Celeste Headlee about The Thief of Time: Philosophical Essays on Procrastination